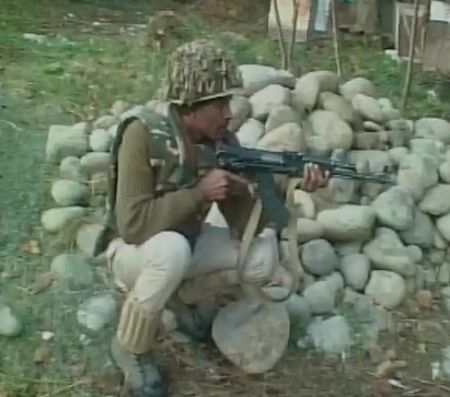 In a major success, security forces on Thursday shot dead top Lashkar-e-Tayiba commander and mastermind of the Udhampur terror attack Abu Qasim, who was behind several terror strikes in the KashmirValley in the past three years.

The operation began at 2 am after intelligence that 28-year-old Qasim, a resident of Bhawalpur in Pakistan, was holed up in a house at Khandipura village in Kulgam, along with an accomplice, official sources said.

A joint team of the army, police and paramilitary forces was rushed in and the village was cordoned off. Qasim was killed when he and his accomplices tried to break cordon laid by security forces.

“We have neutralised a top Lashkar commander Abu Qasim during an operation in Khandaypora in Kulgam district in the wee hours today. It is a major success as Qasim was directly or indirectly involved in all major LeT attacks in Kashmir over the past three years,” Inspector General of Police Kashmir S J M Gillani said.

Giving details of the encounter, he said, “One militant (Qasim) was killed while others managed to get back inside”. The operation was still in progress.

Qasim was one of the top most wanted militants in the state for whom the state police had announced a reward of Rs 10 lakh. The National Investigation Agency, which is investigating the Udhampur case, had also announced a similar reward for information leading to his arrest or killing.

Gillani said Qasim, whose real name is Abdul Rehman, was the mastermind of the Udhampur attack on a Border Security Force convoy on August 5 this year.

Qasim was also involved in the killing of Sub Inspector Mohammad Altaf Dar at Bandipora on October 7, 2015.

The IGP said Qasim’s killing will dent the operational capabilities of Lashkar in Kashmir and also the coordination between various militant outfits in the valley.

Asked if Qasim’s killing would lead to closure of investigations in the Udhampur attack case, the IGP said the case was being investigated by the NIA.

“It is being investigated by the NIA and they have to tie the loose ends before taking the investigations to the logical conclusion,” he added.

Gillani lauded the efforts of the cops who were involved in tracking down Qasim and other militants killed in recent operations in the Valley.

Director General of Jammu and Kashmir Police K Rajendra said, “It was a great achievement for the security forces.”

On October 7, Qasim had managed to flee from Bandipora in north Kashmir when a police party led by Mohammed Altaf had zeroed in on him. He managed to escape after firing indiscriminately on the police party killing police officer Altaf who was known as “Altaf Laptop” and was credited with busting of several terror modules.

Altaf had been tailing his movements for long till he paid with his life.

After spreading the tentacles of terror in north Kashmir, Qasim was trying to gain foothold in south Kashmir and had been operating out of Shopian and Kulgam jungles for sometime now.