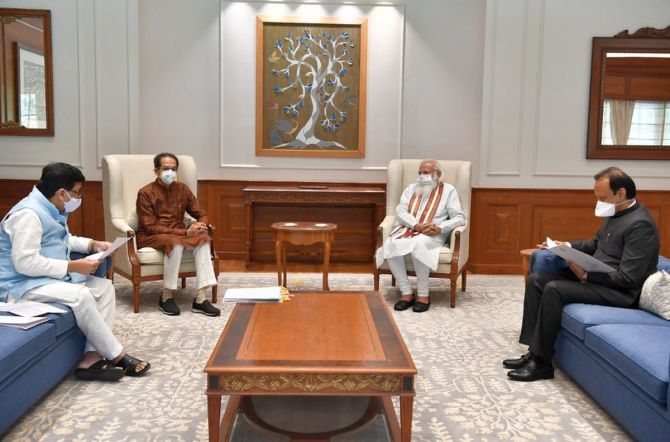 "Issues related to the Maratha reservation, Metro car shed, GST compensation were discussed with the prime minister. There were 12 issues that were discussed," Thackeray told reporters.

He said the prime minister assured them to look into the issues.

"We, all three, are satisfied (with the meeting) because during our meeting there was no political agenda. Whatever issues we raised, he listened to us. I believe there could be some way out," Thackeray said.

The meeting lasted for an hour and a half, Pawar said. Modi had a one-on-one meeting with Thackeray and later with the delegation.

This is Thackeray's second visit to the national capital after taking over as the chief minister of the state in November 2019.

The Shiv Sena-NCP-Congress government wants to move the Metro car shed to Kanjur. The state and the Centre both claim the land as theirs.

The matter is currently pending with court.

The previous Devendra Fadnavis-led BJP government had decided to construct the Metro car shed in Aarey, but the move came under opposition from environmentalists.

After assuming office, the Maha Vikas Aghadi dispensation announced the decision to shift the car shed to Kanjur.

Since then the site for the car shed has become contentious.

Pawar, who is also the Finance Minister of Maharashtra, said issues pertaining to the Goods and Services Tax (GST) compensation was also discussed in the meeting.

"The state is battling coronavirus pandemic and this will have an impact on its revenue and the compensation amount should be given at the earliest," Pawar said.

Besides this, the state has urged the Centre to release pending grant under the 14th Finance Commission recommendation.

The Maratha reservation issue was on top of the agenda. The composition of the delegation assumes significance as it included two senior Maratha leaders -- Pawar and Chavan.

The Maratha is a dominant community in the state and it has been demanding reservation in jobs and educational institutions.

The state government came up with a law to provide reservation to the Maratha community, but it was struck down by court.

The state government's review petition was scrapped by the Supreme Court last month.

Since the verdict, pressure has been mounting on the government to act.

Briefing reporters, Chavan said after the Supreme Court scrapped the quota for Marathas in jobs and educational institutes, all power has now been vested with the Centre to decide on this.

He said the Centre should take steps to uncap the sealing of 50 per cent on reservation in educational institutions.

"The Centre has moved the apex court in this issue. But merely giving rights to state to grant reservation will not be enough as the reservation ceiling limit is fixed at 50 per cent.

"That needs to be changed and we appealed to him that the Centre should argue this point in the Supreme Court," said Chavan.

The delegation also raised the issue of reservation in promotions that was being delayed due to various court orders. Chavan said there should be a nationwide uniform policy on this as many other states too were facing this problem.

On the damage caused by Cyclone Tauktae, Thackeray said that National Disaster Relief Fund (NDRF) parameters that decide on the compensation should be changed. The state, he said, should get compensation according to the new parameters.

He said the western coast frequently faces the problem of cyclones. For this, overhead electric lines and poles should be removed and the whole system should be underground and there is a necessity to build cyclone shelters. The state has also demanded Rs 5,000 crore for this.

Thackeray said the Beed model of crop insurance should be implemented in other districts of the state. The Beed model mandated that insurance companies could not profit more than 20 per cent and the risk would be a maximum of 10 per cent over the premium.

"The Agriculture Ministry can be given directions to implement the same," the delegation said.

Thackeray said the issue of giving Marathi the status of classical language is also pending with the Centre and it should be expedited.

Pawar said the delegation also asked Modi to direct Maharashtra Governor Bhagat Singh Koshiyari to approve nomination of 12 members to the state legislative council, as decided by the state Cabinet. He said this has been pending since last eight months.

The delegation also demanded a bulk drug park for Maharashtra and central allocation of Rs 1,000 crore for it.

It said the Maharashtra Industrial Development Corporation (MIDC) has selected a 250-acre land for the purpose.