Earlier Uddhav had to manage only seniors in the party. Now, he has to manage the leadership of two other parties who have been political adversaries in the past. 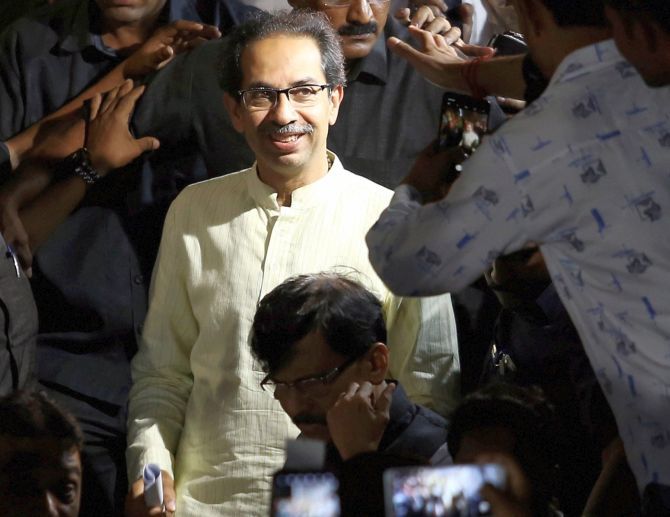 In the mid-1990s when he first entered politics, Uddhav Thackeray was a reluctant politician, spurred into taking a bigger role in the family business by his wife, Rashmi.

Today not only is the retiring Uddhav firmly in command of his party, the Shiv Sena’s apparatus, but has become the first Thackeray to foray where none has ever gone before -- in government, as chief minister of Maharashtra, no less.

In the intervening period, he has proved to be surefooted and calculating.

He has neutralised all future threats.

Narayan Rane, the uncrowned king of the Konkan region in Maharashtra, was shown the door by the Shiv Sena; and cousin Raj has had to float his own party to stay relevant in politics.

Most important, he has settled the succession issue, which means that at least in the near future, in the Shiv Sena there will be no messy family wars of the kind seen in the Pawar family.

It began with the ‘Maharashtra for Maharashtrians’ slogan and rooted its mobilisation strategy in seeking to define such an animal -- the Maharashtrian.

But there was a problem with this strategy -- it excluded linguistic groups which might have been Shiv Sena-minded but found themselves left out, like the migrants from Gujarat, Uttar Pradesh and coastal Karnataka.

To replace this was easy for the Shiv Sena.

It retained its USP -- direct action, militant vision and aggressive rhetoric -- but expanded the community to which this was addressed.

By the early-1980s, Hindu nationalism overtook the Sena’s regional plank.

Added to this was the cult built around its supreme leader, Bal Thackeray.

The Shiv Sainik was now an identifiable political figure.

At the same time, privatisation of development meant the state had to be bypassed in providing many services, in a practical manner.

The Shiv Sena filled this breach.

The problem was leadership.

The organisation succeeded so long as there was Balasaheb Thackeray -- larger than life, loved, feared, revered.

In this Thackeray acted predictably and conventionally.

He also disappointed a lot of his followers.

Before he came to politics, Uddhav was just a mild-mannered, wildlife photographer.

But he found himself inexorably pushed to the political centre-stage and by 1995, was contributing to the party’s propaganda machinery.

But even in 1995, when the party came to power, no one could have dreamt that one day he would emerge as a successor to Bal Thackeray.

When faced with a setback -- electoral or political -- the Sena’s answer used to be violence.

When they lost the Lok Sabha elections in 1998, sainiks stormed the concert of Pakistani ghazal singer Ghulam Ali, they renewed their attacks on painter M F Husain for painting nude pictures of Hindu gods and goddesses and supported the ransacking of his house by the Bajrang Dal, the youth organisation of the Vishva Hindu Parishad.

Sainiks dug up the ground in the Feroz Shah Kotla stadium in New Delhi prior to a cricket match with Pakistan.

They also threatened to attack the bus link between New Delhi and Lahore that the late Prime Minister Atal Bihari Vajpayee had inaugurated.

But that is in the past.

It was in the government but out of it.

It was the ruling party but also the opposition.

The BMC election in 2007 and subsequent victories in municipal elections elsewhere in the state have had the average Shiv Sainik bow their head in deference to Uddhav.

But even without the stature of his father, Uddhav has proved adept at managing the elders in the party.

More to the point, he has encouraged and nudged the party into nurturing a young leadership.

Aaditya Thackeray is frank in accepting that the Sena today is barely recognisable from what it was during his grandfather’s lifetime -- but no less powerful for that.

Earlier Uddhav had to manage only seniors in the party.

Now, he has to manage the leadership of two other parties who have been political adversaries in the past.

In some ways, Sharad Pawar has taken on the role of Balasaheb.

But that will not always be the case.

An old management adage is to give a man a job you know he cannot do and you set him up for failure.

But Uddhav Thackeray has lived his political life on edge and he cannot afford to fail.