Uddhav had asked me to reinstate Waze: Fadnavis

Bharatiya Janata Party leader Devendra Fadnavis on Wednesday claimed that when he was Maharashtra chief minister, Shiv Sena president Uddhav Thackeray had called him in 2018 to seek reinstatement of the then suspended police officer Sachin Waze into the state police force. IMAGE: Ex-Mumbai cop Sachin Waze after being produced by National Investigation Agency in a court following his arres in connection with a probe into the recovery of explosives from a car parked near industrialist Mukesh Ambani's house in Mumbai. Photograph: Mitesh Bhuvad/PTI Photo

He also accused the Shiv Sena of pressuring him over this demand at that time.

Mumbai police officer Waze is at the focus of a probe by the National Investigation Agency into the case related to the recovery of an SUV with explosives near industrialist Mukesh Ambani's house in south Mumbai on February 25.

Waze, arrested in the case on March 13 for his alleged role in the crime, was attached to the Crime Intelligence Unit of city police's crime branch till recently.

Speaking to reporters in New Delhi, Fadnavis said, "I was Maharashtra chief minister in 2018 and also helmed the home department. Shiv Sena chief Uddhav Thackeray had called me to reinstate the then suspended police officer Sachin Waze back into the police force. Some Shiv Sena ministers later met me with the same request."

"When I received the proposal to reinstate Waze back into police force, I verbally sought advocate general's opinion about it. I was told that Waze was suspended after the Bombay high court's order. Therefore, I decided not to reinstate him," Fadnavis said.

The Leader of Opposition in the state Legislative Assembly also alleged that the Shiv Sena even tried to pressurise him over it.

However, after the 2019 assembly polls, the Sena parted ways with the BJP over sharing the chief minister's post and joined hands with the Nationalist Congress Party and the Congress.

"There was pressure on me from the Shiv Sena to reinstate Waze back into the police force. However, I decided to turn down the request," he said.

"He was reinstated after the Shiv Sena joined hands with NCP and Congress and formed the government...But Waze had serious charges against him," the former chief minister said.

"I had got some details of Hiran's post-mortem report, which said that no water was found in his lungs. It means that Hiran was killed and his body was later thrown into the creek.

"The people who wanted to dispose of his body, tried to dump it during the high-tide, but they miscalculated and threw it into the creek during low tide. That is why his body was found. Had it been thrown during the high tide, his body would not have been recovered," Fadnavis alleged.

The sinister plan was to dispose of his body, wait for a few months for the things to settle down and then make the next move, he added.

"Waze and (former Mumbai police commissioner) Param Bir Singh are just pawns in this game. There are very senior people in the power involved in it," he said.

Waze not only returned to the police force, but was appointed in the Crime Intelligence Unit of Mumbai police after inspector-level officers were transferred. All the key investigation cases were handed over to Waze irrspective of the jurisdiction issues, he alleged.

Despite being an assistant police inspector, Waze was seen during the briefings to chief minister or home minister.

"It means Waze holds some sensitive information that would even put the ministers under pressure," Fadnavis said.

Waze, after his suspension tried to opt for voluntary retirement in 2007, but his resignation was rejected on the grounds of ongoing investigation against him, Fadnavis said.

He also said that the recovery of the the explosives-laden vehicle found near Ambanis house and the suspicious death of businessman Mansukh Hiran are interconnected.

"The NIA should take over the investigation of Hiran's death from the ATS," he said.

"Waze knew Hiran for a long time. He had purchased the vehicle from Hiran, but its payment was not made. He was using it from November last year till February this year," he said.

The police officer later returned the SUV to Hiran, but after some days asked him to park it in Mulund area in Mumbai and called the police station to accept Hirans complaint of vehicle theft. The key of the SUV in fact was with Waze," he said.

"It was a well-thought-out plan. Waze was interrogating Hiran for three days and made him write false complaint of several agencies and police officers calling him including Waze himself. The letters were addressed to chief minister Uddhav Thackeray and Mumbai police commissioner, he said.

Raut said Fadnavis, who is a former chief minister of Maharashtra, should not resort to anything that demoralises Mumbai police.

"If the opposition thinks the transfers have been done under any pressure, then it is false. The Uddhav Thackeray government has not done the transfer under anyone's pressure. This is our moral responsibility that till the time the probe is on these transfers should take place," Raut told reporters here.

Taking a dig at Fadnavis, Raut said the BJP leader could keep raising issues for the remaining next three-and-half years as the Mahavikas Aghadi government will complete its term.

Under fire over the handling of the bomb scare outside industrialist Mukesh Ambani's house in Mumbai, the Maharashtra government on Wednesday transferred Singh to the low-key Home Guard.

Credited with eliminating 63 alleged criminals in 'encounters', Waze, a 1990-batch officer of the state cadre, was suspended in 2004 over his role in the custodial death of a 2002 Ghatkopar blast suspect Khwaja Yunus and was reinstated last year. 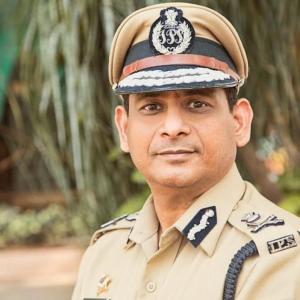