Two men with a cleaver murdered a tailor in Udaipur and posted videos online that said they are avenging an insult to Islam, triggering stray cases of violence in the Rajasthan city, a part of which was placed under curfew. 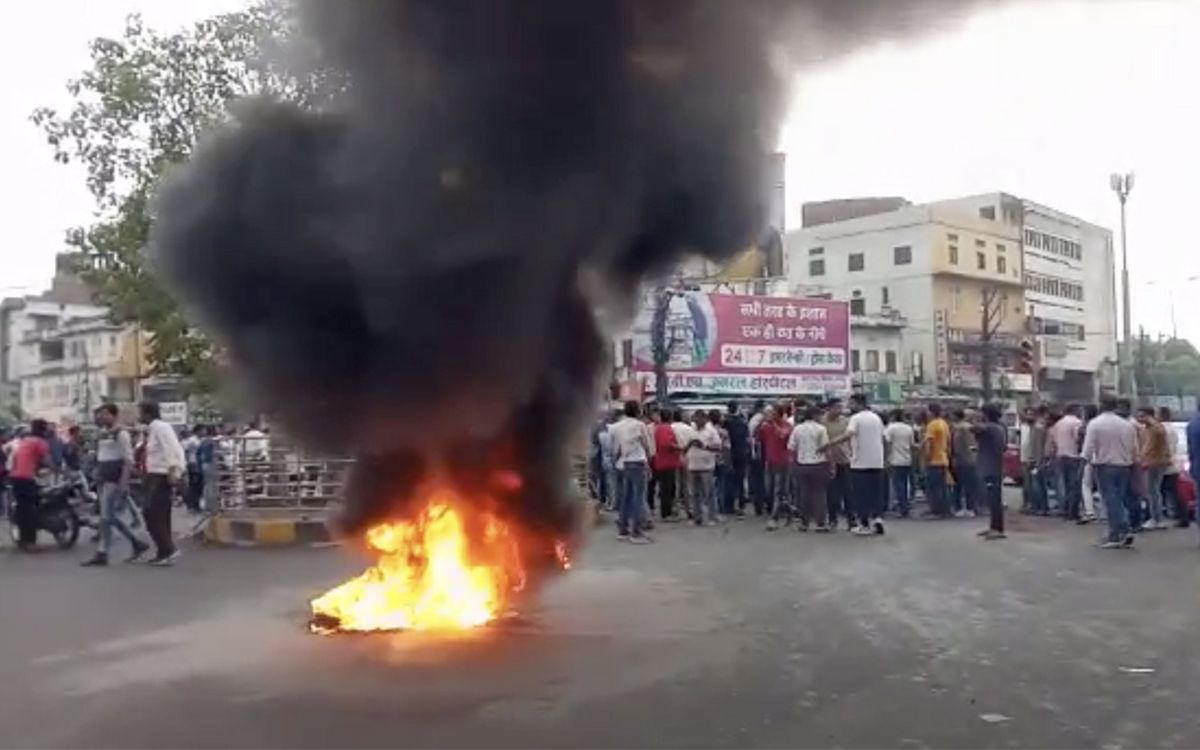 IMAGE: Smoke billows from a burning object after violence erupted in the area following the murder of a tailor named Kanhaiya Lal in Udaipur on June 28, 2022. Photograph: PTI Photo

Prohibitory orders banning people from assembling were clamped across the state for a month and mobile internet services suspended for the next 24 hours.

At 8 pm, curfew was declared till further orders in seven police station areas of Udaipur city.

Two motorcycles were set ablaze in Hathipole area and a mob pelted stones at a mosque in Dhan Mandi, before it was dispersed by police.

The Union Home Ministry dispatched a team from the National Investigation Agency to Udaipur, officials said.

The Rajasthan Police also announced a special investigation team soon after the arrest of the two men, identified as Riaz Akhtari and Ghouse Mohammad.

In a video clip, Akhtari declared that they had “beheaded” the man and went on to threaten Prime Minister Narendra Modi, saying their knife will get him as well.

Indirectly, the assailants also referred to Nupur Sharma, the Bharatiya Janata Party leader suspended from the party over a remark on Prophet Mohammad.

Kanhaiya Lal, the tailor, was recently arrested by the local police over some remarks made on social media by him.

A BJP leader said the victim feared for his life and had sought police protection, but the authorities did not act on his appeal.

The assailants entered his shop in Dhan Mandi posing as customers. As the tailor took the measurements Akhtari attacked him with a cleaver, nearly severing his neck. The other man shot the brutal murder with his mobile phone.

The men fled from the scene and later uploaded this clip on social media. In another video, the alleged assailant said they “beheaded” the tailor and threatened the prime minister for lighting “this fire”.

Yet another provocative video was recorded on June 17, in which Akhtari said he will post it the day he carries out the murder. He asked other members of the community to continue with similar attacks.

As the videos circulated on social media, tension escalated. Shopkeepers in local markets downed shutters and a mob pelted stones and set two motorcycles on fire.

For several hours, shopkeepers stopped police from taking away the body, saying they will allow the removal of the corpse only after the murderers are arrested and compensation -- Rs 50 lakh and a government job -- given to the victim's family. Later, they agreed to assurances given by the authorities.

"The guilty will not be spared. The entire police team is working on it with full alertness. I can imagine the anger which is there among people due to the murder. We are taking action accordingly," he told reporters in Jodhpur.

Gehlot said there is communal tension in the country and the prime minister should address the people. He said both Hindus and Muslims are worried.

BJP state chief Satish Poonia targeted the Congress government in Rajasthan, saying that the murder was the result of its “appeasement policy”.

He said those seen in the video had threatened the victim on June 17.

“The victim had asked for security but it was not given by the police,” he claimed, adding that this indicated the apathy of the state's Congress government. The state unit of the People's Union for Civil Liberties made the same claim.

"The situation in Rajasthan is such that Hindus are being attacked and murdered at many places. It is because of the politics of appeasement of CM Ashok Gehlot," Poonia claimed.

Leader of Opposition Gulab Chand Kataria also condemned the incident and said he was reaching Udaipur Tuesday night. The prohibitory orders under section 144 of the CrPC, however, do not allow the gathering of more than three people.

About 600 more policemen, including five companies of the Rajasthan Armed Constabulary, were sent to Udaipur, officials said. Senior police officers were also rushed to the city.

Gehlot said the trial will be fast-tracked under the state's “case officer scheme”.