The Delhi Police on Thursday issued lookout notices against farmer leaders and registered a case under the stringent Unlawful Activities (Prevention) Act and sedition for the Republic Day violence and said its Special Cell will probe the 'conspiracy' and 'criminal designs' behind the incidents. 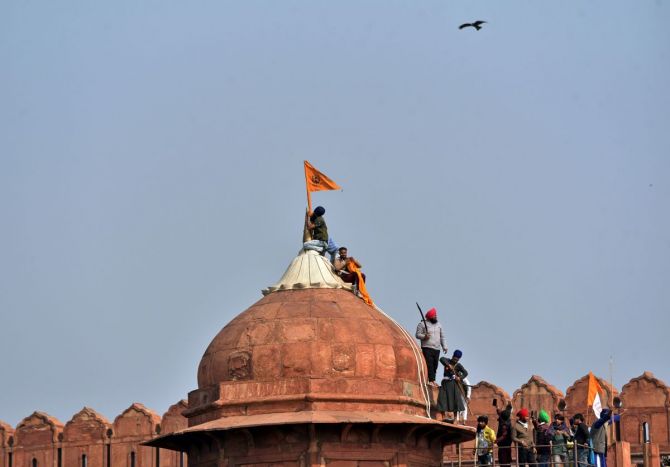 A confrontation was building up at the UP Gate in Ghazipur bordering Delhi with heavy security deployed while frequent power cuts were witnessed in the evening at the protest site, where Bharatiya Kisan Union members, led by Rakesh Tikait, are staying put since November 28.

Tikait, the BKU's national spokesperson, was adamant threatening, "I will commit suicide but won't end protest until the farm bills are repealed."

He also claimed threat to his life, alleging that armed goons were sent to the protest site.

Condemning the Uttar Pradesh government and police for the ultimatum, he said, "No violence has taken place at the Ghazipur border but still the UP government is resorting to policy of suppression. This is the face of the UP government."

The 'verbal' communication from the Ghaziabad administration to BKU came after three farmers union withdrew their protest against the three central farm laws over the violence in Delhi that left 394 security personnel injured and one protestor dead.

"Ghaziabad District Magistrate Ajay Shankar Pandey has communicated to the protestors camping at the UP Gate at Delhi border to vacate the spot by tonight or the administration will remove them," a district official told PTI.

Meanwhile, widening its probe in connection with the violent turn of events on Tuesday during which protesters also stormed the iconic Red Fort and hoisted a Sikh religious flag, Delhi Police said the role and conduct of organisations and individuals based in India as well as those out of the country will be investigated, a move that comes after police chief S N Srivastava warned no culprit will be spared.

The Delhi Police claimed that there was a 'pre-conceived' and 'well coordinated' plan to break the agreement arrived at with farmer leaders to bring international embarrassment for the government on Republic Day.

The Crime Branch will probe the cases of violence at the Red Fort, ITO, Nangloi Crossing, and six other places during the farmers' tractor parade on Republic Day, an official said.

An ACP-rank officer will head each team that will investigate nine cases and there will be multiple officers assisting him or her, he said.

The official said the police have so far registered 33 FIRs in connection with the violence, adding that lookout notices have been issued against 44 people, which include most of farmer leaders.

"The Delhi Police has issued lookout notices against farmer leaders named in an FIR in connection with the violence during the tractor parade," the police commissioner told PTI.

The police asked the 37 farmer leaders, including Tikait, Yogendra Yadav, Balbeer Singh Rajewal whose names have been named in an FIR in connection with the violence, to submit their response within three days, explaining why legal action should not be taken against them as they did not follow the conditions set for the parade.

Facing widespread condemnation, farmer union leaders during the day took out a 'Sadbhavna rally' from the Singhu border to reinforce a sense of unity among the protesters.

Several of their leaders, including Rajewal, Daljeet Singh Dallewal, Darshan Pal and Gurnam Singh Chaduni, who led the rally said the march was organised 'to counter the forces trying to divide the protesting farmers along religious lines and as per states' and to show that they respect the tricolour.

Several tractors and two-wheelers with the national flag took part in the 16-km-long rally which started from the stage at the Singhu protest site and went up to the beginning of the Kundli-Manesar Palwal highway.

Thousands of protesting farmers had clashed with the police during the tractor rally called by farmer unions to highlight their demand for repeal of the Centre's three farm laws.

'A preliminary assessment suggests there was a pre-conceived and well coordinated plan to break the agreement reached between Delhi Police and the leaders of farmers organisations, to indulge in violent confrontation with the security forces, to breach the sanctity of iconic and historical structures and monuments and to create an international embarrassment for the government on the occasion of the Republic Day,' the police said in a statement.

It further said a criminal case has been registered and is being investigated under provisions of the Unlawful Activities (Prevention) Act (UAPA) and sections of Indian Penal Code dealing with sedition.

According to an FIR registered in connection with violence the Red Fort incident, two magazines with 20 live cartridges were snatched from two constables by protestors who also damaged vehicles and robbed anti-riot gears.

The FIR has been filed at the Kotwali police station in north Delhi. It said 141 security personnel were injured during the violence at Red Fort.

The FIR stated that the protestors tried to snatch the guns but both the constables saved their weapons. They, however, could not save the magazines.

Meanwhile, security has been beefed up at all the protest sites -- Singhu and Tikri -- with senior police officials saying that such arrangements have been made as part of measures in view of the January 26 violence.

After the violence, the crowd at the Singhu and Tikri borders has visibly thinned amid heavy police deployment, even as farmer unions said it is because of protestors, who headed to Delhi for the January 26 march, returning home.

The Singhu border, one of the major protest sites that has been home to thousands of farmers for over two months now, was on Thursday noticeably less populated than its pre Republic day version, or even before that.

The number of tractors have reduced, so have the protestors, and the streets that were chock a block until last week, can now be walked through in no time.

Farmers said it was because the protestors who had arrived specifically to participate in the tractor parade on January 26 had returned home.