The Enforcement Directorate on Wednesday questioned corporate lobbyist Nira Radia for about seven hours regarding financial transactions and shareholding patterns of her firms as part of its probe into the 2G spectrum allotment scam.

ED officials said Radia may be summoned again if required. She gave a statement in writing running into 20 pages under Section 50 of the Prevention of Money Laundering Act, which gives the directorate the power to summon a person for examination and submission of documents. Her statement is also admissible in the Court, said ED sources.

Sources said that besides the shareholding patterns in her firms, the ED officials also queried Radia about the details of her bank accounts and income tax returns. The questions were based on the information collected by the ED during its probe and also from documents running into 1,000 pages that Radia had earlier submitted to the agency.

"We have recorded the statement. She (Radia) has promised to submit certain papers. which she would be submitting. We would be calling her as and when required," said Prabhakant, deputy director heading the Delhi zonal unit of the ED.

Emerging from the directorate's office after questioning, Radia, who is at the centre of a controversy over certain taped conversations in connection with the spectrum allocation, told mediapersons that she is cooperating with the authorities.

Official sources said the questioning of Radia, who reached the ED office at about 9:30 am on Wednesday, began at 10:30

am. The questioning ended around 5:30 pm.

"Unfortunately, there has been a mad media frenzy about the fact that I am not here. I am available for full cooperation with the authorities. The matter is presently before the Supreme Court and still sub judice and beyond this I would not like to say anything else," Radia told reporters after the questioning.

"I also want to add that we are fully transparent. Whatever information has been required from us and would be required as part of the ongoing basis would be provided," she added.

Though Radia was summoned by the ED earlier, she had cited health reasons for not appearing before it. The directorate, meanwhile, has also issued summons to certain telecom firms in connection with its probe into the alleged scam, which is also being investigated by the Central Bureau of Investigation.

The CBI in its affidavit in the apex court on November 22 said the telephonic conversation between Radia and others were being examined and she would be summoned at an appropriate time. It had said it will complete investigation and file a chargesheet within three months.

The agency had also said it will take two months time to complete the investigation as it was examining transcripts relating to 5,000 calls (out of which 3,800 have been analysed), 6,000 files and 80,000 pages of documents.
Source: PTI© Copyright 2021 PTI. All rights reserved. Republication or redistribution of PTI content, including by framing or similar means, is expressly prohibited without the prior written consent.
Related News: Nira Radia, Central Bureau of Investigation, Enforcement Directorate, Supreme Court, Prabhakant
SHARE THIS STORY
Print this article
2G case: Cong ready for mid-term polls, not JPC 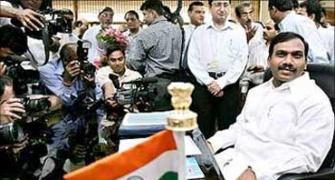