Two suspected members of the Islamic State in Jammu and Kashmir have been arrested near the Red Fort, the Delhi Police said on Friday.

The duo, from Shopian in Kashmir, were identified as Parvaiz Rashid Lone, 24, and Jamsheed Zahoor Paul,19. They were arrested from the Jama Masjid bus stop near the Red Fort, said Pramod Singh Kushwah, deputy commissioner of police-special cell.

They were boarding a bus to return to Jammu and Kashmir when they were nabbed around 10.45 pm Thursday.

The officer said they were using Delhi as a transit point.

A team of the Delhi Police's Special Cell had received inputs from reliable sources that some sleeper cell members of IS-JK had been visiting Delhi frequently for onward travel to Uttar Pradesh, said the officer.

"It was revealed that they were procuring sophisticated weapons through their contacts in Uttar Pradesh. It was learnt that the duo were using Delhi as a transit point and had even managed to deliver an arms consignment to ISJK cadres earlier," he added.

"We want to radicalise the entire world," Jamsheed Zahoor Paul, one of the alleged terrorists arrested by the Delhi Police's special cell, told the interrogators, sources said.

The investigators said the two were highly radicalised and the cell phones seized from them had videos, adding that some notebooks were also recovered, which were being studied by the police.

Parvaiz Rashid Lone is the elder brother of Firdous Rashid Lone, who along with one Sameer Ahmed Lone was killed by security forces in an encounter in Jammu and Kashmir on January 24, the officer said.

Lone is pursuing MTech from Gajrola in Uttar Pradesh after completing his BTech from Amroha. He was inspired by his elder brother, police said.

In September 2016, his younger brother Firdous had first joined the Hizbul Mujahideen, before joining the ISJK, the DCP said.

Firdous had idolised Hizbul Mujahideen commander Burhan Wani, who was killed by the security forces in July, 2016.

Firdous was carrying a reward of Rs 3 lakh and was brainwashed by the radical elements, the police said.

Lone's father was a retired Jammu and Kashmir policeman, they said.

Jamsheed is a final year electrical engineering diploma student in Jammu and Kashmir. He was friends with one Shaukat, who happened to be the brother-in-law of Syed Owais Shafi, police said.

Shafi was allegedly a member of Al-Qaeda-motivated Ansar Ghazwat-ul-Hind and was gunned down in an encounter this year.

Jamsheed had also facilitated Mohammed Abdullah Basith's movement, who was arrested by the National Investigation Agency, the officer said.

This was their second trip to Delhi. They had gone to Kashmir from Amroha in Uttar Pradesh through Delhi in May. The two terrorists had flown into Delhi on September 4 from Srinagar and had then travelled to Amroha.

Two 7.65 pistols and four cell phones were seized from the duo, who were working on the instructions of Omar Ibn Nazir and Aadil Thoker, current commander and deputy commander of IS-JK, he added.

The officer said that they had no plans to carry out terror activities in the national capital and were using Delhi only as a transit point.

He said the ISJK organisation is at a nascent stage.

The duo were involved in transporting the weapons to Shopian, sources said.

They said the suspected terrorists used to put the pictures of the weapon on their WhatsApp group which was administered by their commander.

After two-three days, he was directed by them to come with the weapon to a particular location and then he would call them to another location mislead police. 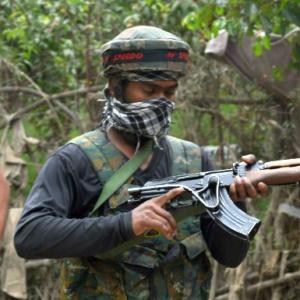