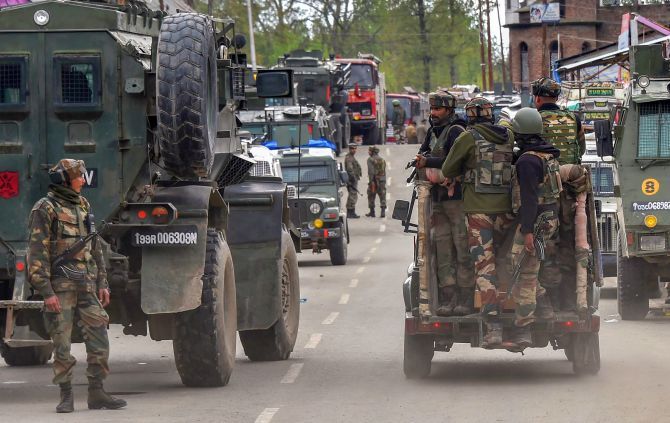 Two Pakistani nationals, who were top commanders of the Jaish-e-Mohammad and wanted for a 'series of terror crimes', were among the three militants killed in an encounter in Jammu and Kashmir's Kulgam district, police said on Monday.

The terrorists have been identified as Raqib Ahmad Sheikh, a resident of Shiganpora in Kulgam, and Pakistani nationals Waleed and Numan, a police spokesman said.

On Sunday, a deputy superintendent of police, an army jawan and the three Jaish-e-Mohammad (JeM) terrorists were killed during the encounter in the district's Turigam area.

He said, according to police records, the three slain militants were affiliated to proscribed terror outfit JeM.

"The two killed Pakistani terrorists, Waleed and Numan, as per police records, were top commanders of proscribed terror outfit JeM and were active in the southern parts of the Kashmir Valley.

"As per the police records, they were involved in conspiring and executing several terrorist attacks, and were wanted by the law for their complicity in a series of terror crimes, including attacks on security establishments and civilian atrocities. Several terror crime cases were registered against them for their terrorist activities,” he said.

The spokesman said arms and ammunition, including rifles, were recovered from the encounter site.

"These materials have been taken in the case records for further investigation and to probe their complicity in other terror cases," he said.

The European Union has asked Pakistan to take 'clear and sustained' actions targeting not only all UN-listed transnational terrorist groups but also individuals claiming responsibility for attacks in the wake of the Pulwama terror strike.

The statement came amid heightened tension between the two nuclear-armed arch-rivals after the February 14 suicide attack by Pakistan-based Jaish-e-Mohammad that killed at least 41 Central Reserve Police Force soldiers in Jammu and Kashmir's Pulwama district.

Federica Mogherini, High Representative of the EU for Foreign Affairs and Security Policy and Vice President of the EU Commission, urged Pakistan and India to urgently 'de-escalate' the tension which has built up after the attack.

She spoke to Foreign Minister Shah Mahmood Qureshi on Sunday and discussed the current situation, a delegation of the European Union (EU) said in a statement here.

The EU is also in contact with India, it said.

Mogherini also highlighted the need to 'continue addressing terrorism including clear and sustained actions targeting not only all United Nations-listed transnational terrorist groups but also individuals claiming responsibility for such attacks', the statement said.

She said the EU's policy has always been to promote a dialogue between Pakistan and India to sort out differences.

After the attack, which was claimed by the United Nations-proscribed JeM, India launched a major diplomatic offensive against Islamabad after the attack and highlighted Pakistan's role in using terrorism as an instrument of state policy.

India asked Pakistan to take immediate and verifiable action against terrorists and terror groups operating from territories under its control.

New Delhi also announced the withdrawal of the Most Favoured Nation status for Pakistan and hiked the customs duty by 200 per cent on goods originating from Pakistan.

No signs of decline in Pak-sponsored terrorism in J&K: DGP

Asserting that there was 'no signs of decline' in Pakistan-sponsored terrorism, Director General of Jammu and Kashmir Police Dilbagh Singh on Monday said the security forces were determined to restore peace in the state.

"Pakistan-sponsored terrorism is going on for the last many years and showing no signs of decline but we are determined to eliminate terrorism from the state and restore peace in the region," Singh told reporters after the wreath laying ceremony of Deputy Superintendent of Police, Aman Kumar Thakur in Jammu.

Thakur and a soldier were killed in the fierce gunfight with JeM terrorists in Kulgam district of south Kashmir on Sunday.

J-K Governor Satya Pal Malik, Union minister Jitendra Singh, advisors to the Governor and senior officers of the police, Army, CRPF and civil administration attended the ceremony at police lines in Jammu and paid floral tributes to Thakur whose body was flown from Srinagar to Jammu in the morning.

"JeM, Lashkar-e-Tayiba (LeT) and some other groups are continuing with their activities in Kashmir," the DGP said.

"Police and other security forces are conducting their operations to counter them and wipe them out and I am hopeful that in the coming months, the situation will improve further," he added.

Singh further said the security forces were 'proud of the sacrifices' made by the jawans and were 'determined' to eliminate all the active terrorist groups in the state 'in the coming months'.

The security situation in the state is 'well under control' and there is 'no need to panic', he stressed.

"Police and other security forces are doing their job satisfactorily and there is peace in Kashmir and Jammu," he said further.

The police chief lauded Thakur for his courage saying, "We have lost a brave colleague and we are proud of his martyrdom".

"On a specific information that a group of JeM terrorists were hiding in a village in Kulgam, an operation was jointly launched by police, Army and the CRPF on Sunday."

"The officer killed two terrorists who are believed to be Pakistanis and came to the help of his colleague who received a bullet injury," Singh said.

In the process, he received a bullet injury and succumbed to injuries while being shifted to hospital, he said.

"This brave officer was working in the counter-insurgency operations group in Kulgam for the last two years. Some months ago, he received DG commendation medal," Singh said.

"Last year, he has also received Sher-e-Kashmir police medal for gallantry and his name was recommended for a bigger award but before that he sacrificed his life for the nation," he added.

The sacrifice of the officers and the jawans will motivate the forces in their fight against terrorism to restore peace in the state, he said further.

"We bow before the sacrifice of our martyrs and salute them. The fight against terrorism will continue with more vigour," he said.

"We also stand by the families of our martyrs and want to tell them that we are with them in this hour of grief," he added.