While Vyas was the Collector of Mumbai, Phatak was City Municipal Commissioner when the scam took place.

According to the CBI, Vyas, 49, during his tenure as Collector from August 2002 to May 2005, allegedly connived with other accused and accepted false documents as proof of income and granted membership to those who were not eligible. His wife Seema Vyas, also an IAS officer, has a flat in the posh Adarsh building.

Vyas, a 1989 batch officer was arrested for his alleged role in the scam on Wednesday.

Phatak is alleged to have allowed the height of the building in upmarket Colaba to be raised beyond 100 metres without the approval of the High-Rise Committee of the municipal body. His son received a flat in the Adarsh Society building allegedly as quid pro quo.

The high court is hearing a batch of public interest litigations filed by social activists Simpreet Singh and Pravin Wategaonkar seeking monitoring of the probe by the high court and invoking provisions of Prevention of Money Laundering Act (PMLA) in the case. 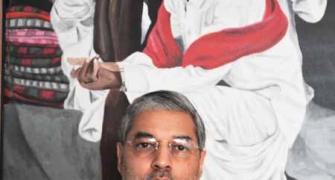