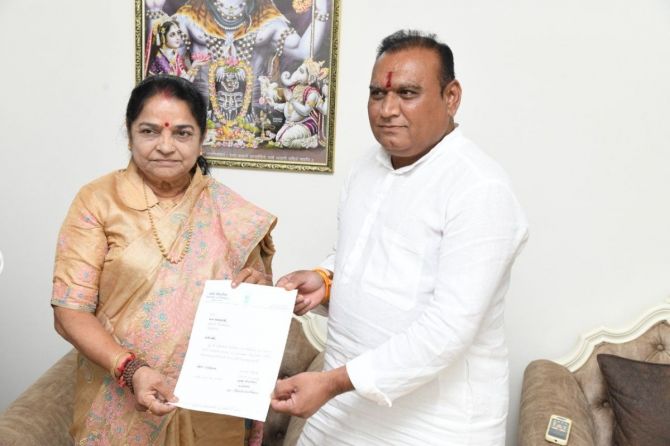 He was inducted during a function organised at the BJP’s state headquarters 'Kamalam'.

Assembly elections in the BJP-ruled state are slated to be held by the end of this year.

Ribadiya had submitted his resignation to assembly speaker Nimaben Acharya on Tuesday.

Soon after joining the BJP, the former Congress MLA praised Prime Minister Narendra Modi for his leadership and said he was influenced by the central government's "pro-farmer" policies and initiatives like raising the minimum support price (MSP) and introducing new technologies for their support.

The former legislator from Visavadar seat in Junagadh district of the state's Saurashtra region also targeted the Congress for being "directionless" and accused the party leadership of not helping him in time of need.

"I am influenced by the way Modi is developing the country and working to protect the interests of farmers by raising the MSP and taking several other initiatives," he told reporters.

"At the same time, Congress has become directionless," he alleged.

Ribadiya said the BJP's policies have influenced the people of his constituency as well.

"The BJP government heeded my request for electricity supply to farmers in my region during the day time. I am influenced by many such initiatives and that is the reason why I have joined the BJP. In the coming days, many of my friends will also join the party. We will work as its soldiers," he said.

He added that the issues that he had raised in the legislative assembly were not against any party or any particular person, but for the benefit of farmers. "All the issues were resolved by the BJP government, which is also a reason I have joined it," he claimed.

Ribadiya was elected from the Visavadar assembly segment, a predominantly Patel community seat, in 2017 as a Congress candidate. Before that, he had also won the 2014 bye-election from that constituency.

The 2017 assembly elections in Gujarat were held against the backdrop of the Patidar quota agitation, and members of the Patel community in the Saurashtra region had largely voted for the Congress to express their anger against the ruling BJP.