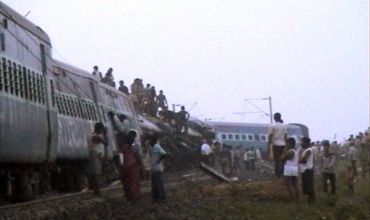 At least 120 passengers are feared killed and 160 injured after suspected Maoists derailed 13 coaches of Mumbai-bound Gyaneshwari Express leading to a collision with a goods train in West Midnapore district early on Friday.

Investigating officials have ruled out blast as the cause for the accident in West Midnapore on Friday. It is confirmed that the derailment was not due to a blast, they said.

Five of the coaches were hit by a speeding goods train that came from the opposite direction on an adjoining track.

A fishplate is a metal or wooden plate bolted to the sides of two abutting rails.

At least 160 others are feared to be trapped inside the crashed bogies, sources said.

Though officials said they had removed 65 bodies from the site, doctors and those involved with the rescue operation told rediff.com that the figure could be much higher.

Union Railways Minister Mamata Banerjee, who rushed to the site around 6 am, said she had been told that an explosion on the tracks had caused the derailment.

"We fear this is a Maoist attack," Banerjee said.

"The railways are a soft target The Maoists have attacked the railway in the past and, it seems, even now," she said.

However, railway officials said a section of the rail had been removed.

West Bengal Relief Minister Mortaja Hussain said hundreds of people are feared trapped in the train, which was heading to Mumbai from Kolkata.

Though the railway ministry had earlier assured that pilot cars would guide passenger trains travelling through Maoist-infested areas, reports said there was none on Thursday night.

The incident occurred around 1.30 am on Friday in West Midnapore -- a Maoist stronghold about 135 km west of Kolkata.

The Maoists had declared four-day bandh in and around the area where the accident occurred.

However, they are yet to claim responsibility for the alleged attack. Maoist posters have been found at the site.

Indian Air Force helicopters have been pressed into service at the accident spot and have airlifted some of the injured to hospitals. The Border Security Force disaster management team is also on its way to the site.

Railway Minister Mamata Banerjee, who is at the accident spot, said that the blast which caused the express train to derail took place on the first day today of a four-day 'Black week' called by the Maoists.

Banerjee said that a patrol engine had passed through the area half an hour earlier, but the timing of the blast proved disastrous with a portion of the line being blown away.

This is the second Maoist attack on civilians this month. Naxals had blown up a civilian bus in Dantewada district of Chhattisgarh on May 17, killing at least 36 people, including 12 Special Police Officers.

South Eastern Railway Public Relations Officer Soumitra Majumdar said the train had 24 coaches. After the explosion, 13 including 10 sleeper coaches, derailed of which five were hit by the goods train coming on the opposite track.

An unreserved coach, the pantry car and luggage van also derailed, he said.

Angry passengers said the first signs of relief came only around 5 am, three-and-a-half hours after the incident.

Nine of the coaches which were not damaged in the blast took the injured and the other passengers to Kharagpur where they were admitted to hospital.

Anti-Maoist forces were at the spot and assisting the police and rescue personnel in extricating the bodies from four badly damaged sleeper coaches S-5, S-6, S-7 and S-8.

"I have been asked by the chief minister to rush to the accident site with six special rescue teams and three mobile ambulances," Dasgupta said before leaving for the accident spot on Friday morning.

A relief train left Kharagpur with a team of 12 doctors and 20 paramedics as also two doctors from the Kalaikunda airbase, the officials said.

Image: Onlookers gather near the wreckage of train carriages at the site of an accident at Jhargram in West Bengal | Photograph: Reuters

Rediff Correspondent
Related News: Mamata Banerjee, West Midnapore, Asim Dasgupta, PTI, Helplines
SHARE THIS STORY
Print this article
An India pushed under the carpet hits back
Pay your condolence to the martyrs of Dantewada
The man behind the biggest Naxal massacre 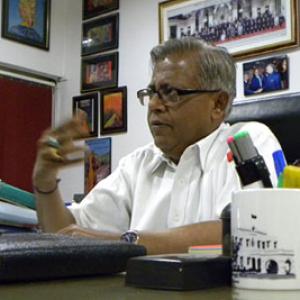 'Mines and ambushes cause us most casualties'

Is the bloodbath at Dantewada a wake-up call?