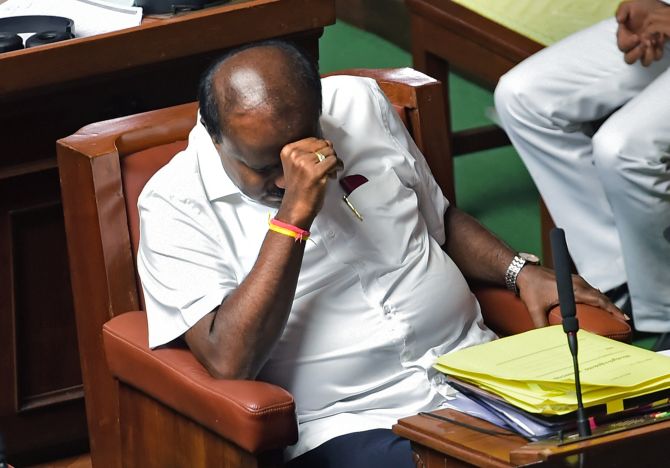 Marked by high drama, the Karnataka assembly was adjourned till Friday after it took up the confidence motion moved by Chief Minister H D Kumaraswamy to decide the fate of the Congress-Janata Dal (Secular) government wracked by rebellion by a section of its MLAs threatening its survival.

The drama unfolded right from the word go as, facing truncated strength caused by the en masse resignation of 16 ruling coalition MLAs, Kumaraswamy moved a one-line motion, saying the House expressed confidence in the 14-month old ministry headed by him.

20 lawmakers did not turn up on Thursday, including 17 from the ruling coalition, 12 of whom are corralled in a hotel in Mumbai, as the House debated in a surcharged atmosphere.

The House that barely focussed on the debate on the motion saw three adjournments, acrimony and repeated disruptions by belligerent slogan shouting Congress members before the proceedings were wound up for the day.

Before it was adjourned, Bharatiya Janata Party leader B S Yeddyurappa declared his party members would stay put in the House itself overnight and even till the time the trust vote was decided.

"We will stay until the trust vote is decided," Yeddyurappa said after the BJP, exasperated over the delay in taking up the voting, also rushed a delegation to Governor
Vajubhai Vala to ask the Speaker K R Ramesh Kumar to conclude the trust vote process by the end of the day itself.

Acting swiftly, Vala asked the speaker to complete the process of vote of confidence moved by the end of the day. 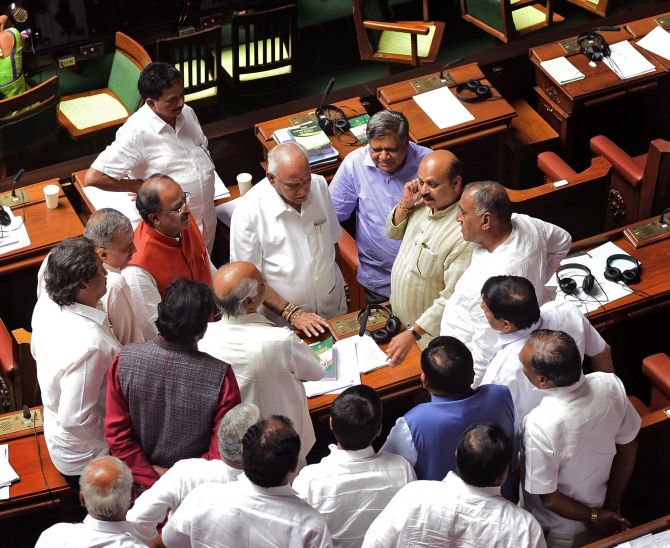 IMAGE: Former chief minister and BJP state president B S Yeddyurappa with his party MLAs after the assembly was adjourned for the second time at Vidhana Soudha, in Bengaluru, on Thursday. Photograph: Shailendra Bhojak/PTI Photo

BJP leaders said they were mulling moving the Supreme Court in the light of Thursday's developments.

Adding to the worries of the ruling coalition, another Congress MLA Shreemant Patil was not seen in the House, in the midst of reports he has been admitted in a Mumbai hospital.

At one point, Congress members carrying pictures of Patil rushed towards the well of the House shouting slogans 'Down Down BJP' and 'down down operation Kamala (lotus)' to bring down the government.

Bahujan Samaj Party MLA Mahesh, on whose support the coalition was counting, also did not show up, amid reports he was keeping away as he has not received any directions from the party leader Mayawati on the stand to be taken on the trust vote.

Seeking the trust vote, Kumaraswamy said the rebel MLAs had cast doubts about the coalition government across the country and 'we have to tell the truth'.

"The entire nation is watching the developments unfolding in Karnataka," he said.

As soon as the motion was moved, Yeddyurappa stood up and said the trust vote process should be completed in a single day.

"The Leader of Opposition seems to be in a hurry," Kumaraswamy taunted Yeddyurappa.

As the chief minister sought the trust vote, Congress Legislature Party leader Siddaramaiah pressed for deferring the confidence motion till the assembly Speaker decided on the issue of whip in the wake of the Supreme Court verdict on the political crisis in the state.

Siddaramaiah said the 15 rebel MLAs were influenced by the apex court order that they can abstain from attending the assembly proceedings and asked speaker to give a ruling on the fate of whip issued by him as Congress Legislature Party leader.

"If this motion is taken up, then it will not be constitutional. It violates the constitutional provisions. I request you to defer it. I want your ruling on this point of order," Siddaramaiah told the Speaker.

The speaker then said he would consult the advocate general and adjourned the House for lunch.

With the chief minister yet to make his speech on the motion, the House went about discussing the issue of the whip, amid acrimony between the treasury benches and BJP members on the political turmoil in the state.

Sensing an alleged attempt to delay the vote, BJP rushed a delegation to meet the governor to direct the speaker to conclude the trust vote process Thursday itself.

'I, therefore, send this message to the House to consider completing the proceedings of the House by the end of the day.'

Vala's message under Article 175 of the constitution added that completing the proceedings by the end of the day will uphold the highest traditions of democracy and parliamentary practice.

The speaker read out the message and said, "I have brought it to the notice of the House."

The House also was rocked by trading of charges after the Congress alleged that its MLA Shreemant Patil, who suddenly disappeared after being with them at a resort and went incommunicado, had been 'kidnapped' as part of efforts to 'topple' the coalition government.

Senior minister D K Shivakumar said they would produce documents to show that Patil was forcibly admitted to the hospital to skip assembly.

The speaker then directed Home Minister M B Patil to contact the family of the MLA and report back to him. 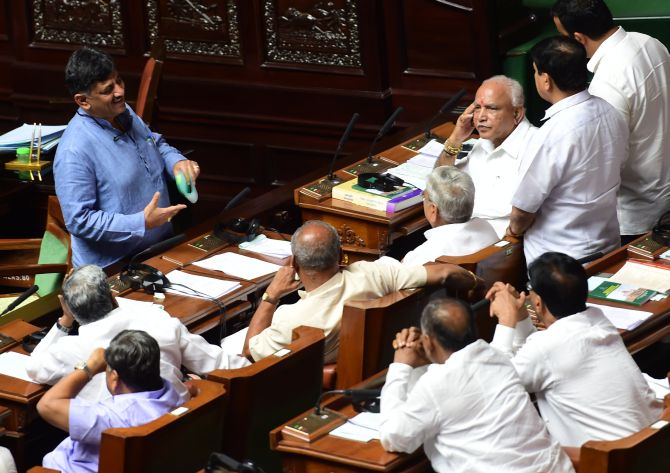 BJP members made their displeasure known several times over alleged delay in taking up the voting on the confidence motion, leading to adjournment of the House for half an hour.

Congress and BJP MLAs, who were sequestered in resorts in the city fearing poaching by the rival camps, were herded together and brought in buses just before the assembly began.

The trial of strength is taking place a day after the Supreme Court ruled that the 15 rebel Congress-JD(S) MLAs 'ought not' to be compelled to participate in the proceedings of the ongoing session of the state assembly.

Armed with the court order, the rebel Congress-JD(S) MLAs camping in Mumbai have said there was no question of stepping back on their resignations or attending the session.

As many as 16 MLAs -- 13 from the Congress and three from JDS -- had resigned, while independent MLAs R Shankar and H Nagesh have withdrawn their support to the coalition government, putting the Kumaraswamy-led government in jitters.

If the resignations of 15 MLAs (12 from Congress and 3 from JD-S) are accepted, the ruling coalition's tally will plummet to 101, (excluding the Speaker) reducing the 14 month-old Kumaraswamy government to a minority.

This is the third motion on trust vote in the assembly after the 2018 assembly polls yielded a fractured mandate with the BJP emerging as the single largest party with 104 seats but failing to mobilise numbers.

Yeddyurappa had resigned as CM after being in office for three days before facing the trust vote in May last year.

Kumaraswamy who succeeded him had won the trust vote after forming the coalition government.