Rudy Giuliani, the personal lawyer to Donald Trump, has tested positive for COVID-19, becoming the latest person in the US president's inner circle to be infected by the deadly virus. 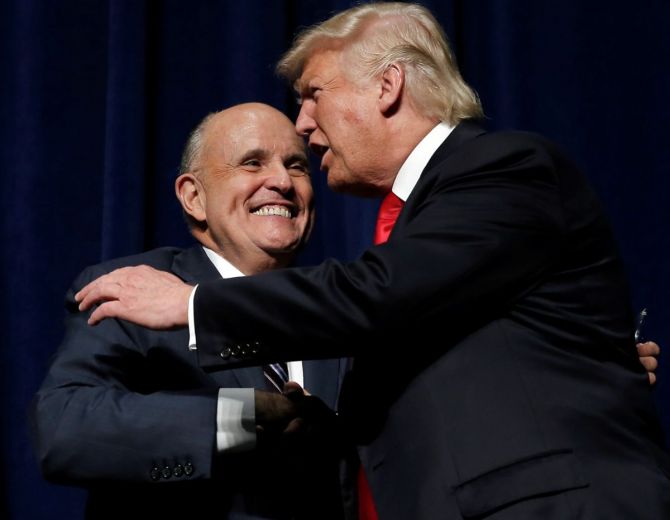 Giuliani, 76, has been taken to the Medstar Georgetown University Hospital in Washington DC, according to US media reports.

The news of the former mayor of New York testing positve was first tweeted by US President Trump on Sunday.

The US president and his team have been criticised for shunning COVID-19 safety guidance. Trump, 74, was tested positive in October.

Trump, a Republican, who is yet to concede defeat in the November 3 presidential election, tweeted: "Get better soon Rudy, we will carry on!"

Giuliani has been leading the Trump campaign's legal challenges to the 2020 election won by former vice president Joe Biden, a Democrat.

In a tweet, Giuliani thanked well-wishers for their messages, and said he was "recovering quickly".

Giuliani is considered at high risk for complications from the coronavirus due to his age, CNN reported.

Giuliani has spent recent weeks traveling extensively to lead Trump's failed legal challenges in an attempt to overturn the results of the presidential election.

On Wednesday, he was in Lansing, Michigan, where he did not wear a mask while speaking to lawmakers in the key battleground state at a hearing lasting more than four hours. On Thursday, he was in Atlanta, where he talked to Georgia state senators without a mask.

Giuliani is the latest of more than a dozen people in Trump's inner circle who have tested positive since October. Giuliani's son, Andrew Giuliani, who is a White House staffer, said he tested positive on November 20.

Boris Epshteyn, another Trump adviser, tested positive shortly after appearing alongside Giuliani at a press conference on November 25.

Others include the president's chief of staff Mark Meadows and press secretary Kayleigh McEnany, along with his wife Melania and sons Donald Jr. and Baron.

Over 14.7 million people have been infected with COVID-19 in the US, according to Johns Hopkins University, and more than 282,000 people have died - the highest figures of any country in the world.

Health experts are warning that tens of thousands more Americans will die from COVID-19 before they think the pandemic can be brought under control with the help of vaccines.

US authorities have decided that medical and emergency workers as well as employees and residents of nursing homes are at the highest risk of contracting the infection and will be first in line to be inoculated.

Health and Human Services Secretary Alex Azar said that 30 million to 40 million doses of the vaccine will be available by the end of the year, with millions more doses to be manufactured in the first half of 2021.

Azar said if a panel of experts at the Food and Drug Administration approves the Pfizer vaccine, “within hours [health workers] can be vaccinating” patients.