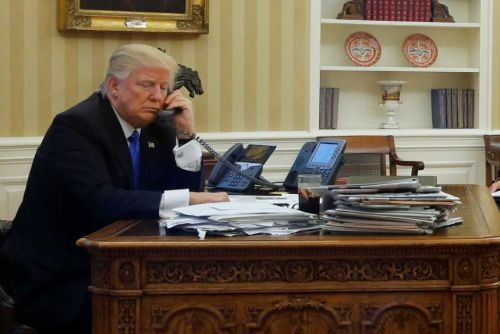 In his conversation with Nieto, according to the transcripts, Trump is heard pleading that the latter should stop saying that Mexico would not pay for the wall.

In his conversation with the Australian Prime Minister, Trump is heard getting agitated on the refugee issue and eventually telling him that the call was the most irksome of the day.

Transcripts of both the conversations that happened on January 27 and 28 respectively were posted by The Washington Post.

The top American daily is now owned by Amazon founder and CEO Jeff Bezos. Notably in the last few days, Amazon has succumbed to the Chinese demands on restricted internet freedom.

The White House did not immediately comment on the embarrassing leak of Trump's conversations with world leaders. In a statement, The Washington Post said the transcripts were prepared by the White House but have not been released.

"The Post is publishing reproductions rather than original documents in order to protect sources. The reproductions below also include minor spelling and grammatical mistakes that appeared in the documents," it said.

As per the transcripts, Trump is heard asking the Mexican leader not to tell the press that Mexico would not pay for the construction of the wall along the US-Mexico border.

In his conversation with Turnbull, Trump says that accepting the refuges will "make us look awfully bad".

"We have to stop. We have allowed so many people into our country that should not be here. We have our San Bernardino's, we have had the World Trade Center come down because of people that should not have been in our country, and now we are supposed to take 2,000. It sends such a bad signal. You have no idea. It is such a bad thing," Trump is quoted as saying in the transcripts.

The conversation between the two leaders grew sour as Trump rejected an agreement to take refugees.

"I have been making these calls all day and this is the most unpleasant call all day," Trump told Turnbull. "(Russian President Vladimir) Putin was a pleasant call. This is ridiculous," said the US President, as he abruptly ends the call.