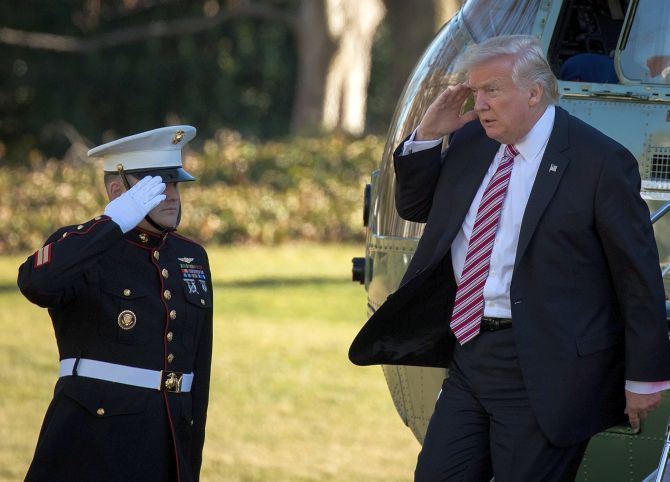 In a major policy speech on Thursday, United States President Donald Trump is all set to announce a new proposal to overhaul the country's immigration policy that would give preference to foreigners based on merit rather than the existing system that gives preference to family ties, a move that could end the agonising Green Card wait for hundreds and thousands of Indian professionals.

Brainchild of Trump's son-in-law Jarred Kushner, the new plan primarily focuses on strengthening border security and revamping the system of Green Card or legal permanent residency so that people with merit, higher degrees and professional qualifications could get an easy access to the immigration system.

As of now, about 66 per cent of the green cards are given to those with family ties and only 12 per cent are based on skills. The Trump Administration intends to change this.

Trump is scheduled to roll out his plan at the Rose Garden of the White House Thursday afternoon.

However, the plan faces an uphill task mainly because of the bitterly divided Congress on partisan lines, especially on the issue of immigration reform.

Even if Trump succeeds in convincing his Republican lawmakers on this, the opposition Democrats, led by Congresswoman Nancy Pelosi, House Speaker, and Senate Minority Leader Chuck Schumer, are dead against any such legislative success to the president.

The Trump Administration is well aware of the issue. It is planning to make it an election issue in 2020 if the opposition Democrats are unwilling to be engaged on this, a senior administration official told reporters during an interaction on the eve of the rollout of the merit-based immigration policy.

Both Trump and Kushner are believed to have briefed Republican lawmakers on the issue.

In his speech, Trump is unlikely to propose changes in the existing number -- 1.1 million -- of green cards issued each year.

Instead, the new policy calls for issuing more than half of the green cards to those based on employment or skills.

According to the details given by the senior administration official, the proposed system mirrors the point-based system of countries like Canada, Australia, New Zealand and Japan.

Officials said the plan would favour those immigrants who are exceptional students, those with 'extraordinary talent' and people who work in professional and specialised vocations.

The applicants would receive points for age, English proficiency and offers of employment at a certain wage threshold in order to protect low-wage American workers, the official said.