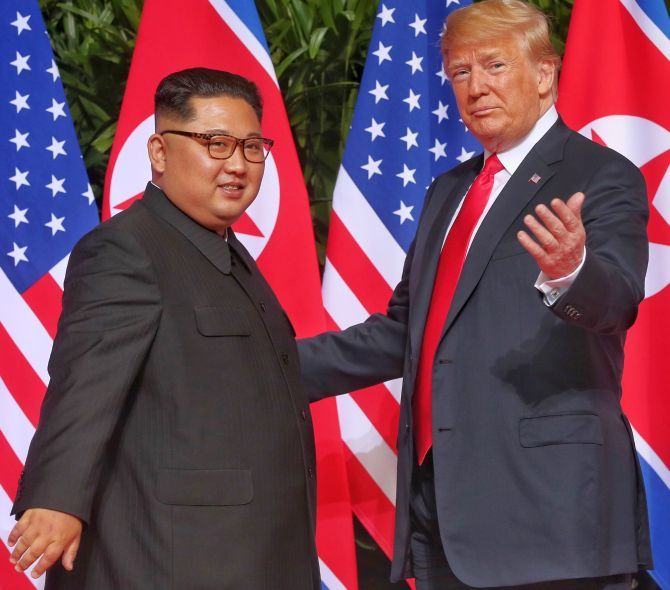 United States President Donald Trump on Wednesday thanked Kim Jong-un for taking the “first bold step” towards a bright new future for his people and said the North Korean leader holds the opportunity to be remembered as one who ushered in a glorious new era of security and prosperity for his citizens.

Kim on Tuesday pledged to work toward the “complete denuclearisation” in return for security guarantees from the US as Trump wrapped up his historic summit with outcomes that could ease tensions and reshape the geopolitics of the Asia-Pacific region.

“I want to thank Chairman Kim for taking the first bold step toward a bright new future for his people. Our unprecedented meeting -- the first between an American President and a leader of North Korea -- proves that real change is possible!” Trump said in a tweet aboard Air Force One on his way back to Washington, DC.

In Singapore on Tuesday, Trump held an epoch-making summit with Kim, the first-ever between the leaders of the two countries. After the meeting, North Korea agreed to give up its nuclear weapons and achieve a denuclearised Korean peninsula.

“There is no limit to what NoKo (North Korea) can achieve when it gives up its nuclear weapons and embraces commerce & engagement with the world. Chairman Kim has before him the opportunity to be remembered as the leader who ushered in a glorious new era of security & prosperity for his citizens!” Trump said in another tweet.

Trump described his Singapore trip as a “truly amazing” visit.

“Great progress was made on the denuclearisation of North Korea. Hostages are back home, will be getting the remains of our great heroes back to their families, no missiles shot, no research happening, sites closing,” he said.

“Got along great with Kim Jong-un who wants to see wonderful things for his country. As I said earlier today: Anyone can make war, but only the most courageous can make peace!” Trump said in another tweet to his more than 52.7 million followers.

Meanwhile, US Secretary of State Mike Pompeo headed for Seoul and then to Beijing to brief S Korean and Chinese counterparts on the just concluded summit meeting between Trump and Kim. Soon after the Singapore meeting concluded, he called his counterparts in South Korea and Japan to provide a brief readout of the talks.