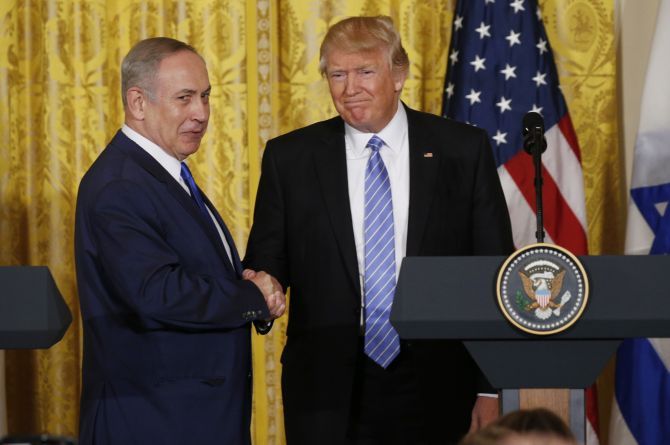 President Donald Trump on Wednesday recognised Jerusalem as Israel's capital and ordered to start the process of moving the United States embassy from Tel Aviv to the holy city which many Arab leaders warned could trigger an upheaval in the already volatile Middle East.

The controversial decision, which was promised by Trump during his 2016 campaign and appeals to his right-wing base, could lead to massive protests in the Middle East and elsewhere, Arab leaders warned.

"I have determined it is time to officially recognise Jerusalem as the capital of Israel," Trump said. Trump made the major announcement from the White House.

In taking this action, Trump fulfils a major campaign promise.

"Jerusalem has been capital of Jewish people since ancient times and modern reality that it has been the seat of government, important ministries, its legislature, the Supreme court," the official said, speaking on condition of anonymity.

The move, which is being opposed by the countries in the Middle East, is unlikely to have an impact on the two-state solution to the Israel-Palestine conflict, the official said.

Trump decided to go ahead with his plan, ignoring dire warnings from Saudi Arabia's King Salman and Egyptian President Abdel Fattah al-Sisi, one of his closest allies in the Middle East.

Terming it a 'dangerous step', Salman cautioned the move will 'provoke the feelings of Muslims around the world'.

Sisi warned that the move will complicate the situation and 'jeopardise the chances of peace in the Middle East'.

Pope Francis voiced 'profound concern' over the move, making a 'heartfelt appeal to make everyone's commitment to respect the status quo of the city, in accordance with the relevant United Nations resolutions'.

Meanwhile, Israeli Prime Minister Benjamin Netanyahu refrained from commenting on it in his first speech since the move was confirmed.

Netanyahu, speaking at a diplomatic conference, instead focused on Israel's security and economic ties with countries globally during his speech.

Responding to questions, senior administration officials said the President believed that the move would have no impact on the peace process and the deal is within reach and can be achieved.

Earlier, Trump spoke over phone with a number of leaders in the Middle East to share his decision on Jerusalem, the White House said.

Meanwhile, the State Department warned US embassies around the world to prepare for possible protests and violence and banned travel by government employees and their families to Jerusalem's Old City and the West Bank.