Trump on retweeting Mussolini: 'It's a very good quote' 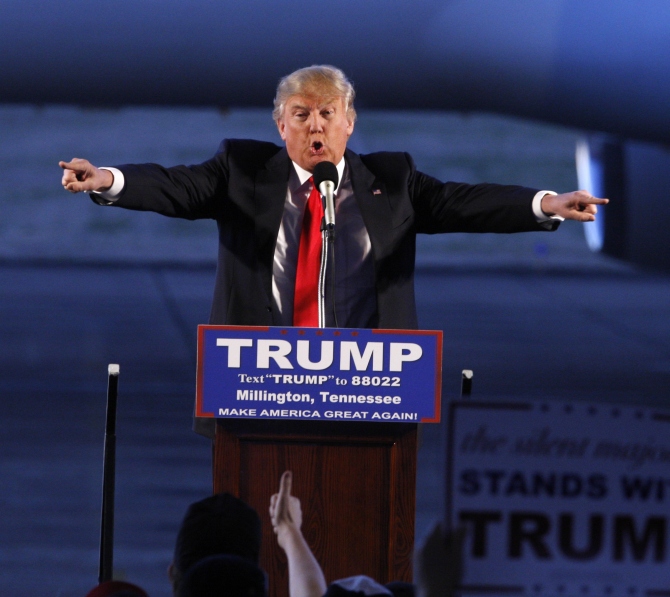 Republican presidential front-runner Donald Trump again stirred up controversy after he retweeted words attributed to Italian dictator Benito Mussolini and then defended his action saying it was a "very good quote".

"@ilduce2016: 'It is better to live one day as a lion than 100 years as a sheep,' --@realDonaldTrump #MakeAmericaGreatAgain," the Republican front-runner shared from a parody Twitter account.

The website Gawker claimed credit for creating the parody account about Il Duce, which translates to 'the leader' in Italian.

The Gawker website said it had created "a Twitter bot that would post quotes from the writings and speeches of... Mussolini" at Trump until he eventually retweeted one on Sunday. The parody account's profile picture is a composite of Trump's hair and Mussolini's face.

The 69-year-old reality TV star-turned politician, later told NBC News, it did not make a difference to him whose quote it was.

"It's a very good quote. It's a very interesting quote...I know who said it. But what difference does it make whether it's Mussolini or somebody else?" Trump said.

Mussolini led Italy from 1922 until 1943. The fascist dictator led the country into war with the United States in 1941. Some conservative critics of Trump's rhetoric about use of power, both in the US and abroad, have suggested that his declarations fall along the lines of fascist oratory.

Trump is an avid Twitter user, and he often goes on posting sprees in the middle of the night or early in the morning. At times, his retweets have been questionable, including posts from accounts associated with white nationalists.

Also on Sunday, Trump appeared reluctant to distance himself from an endorsement from David Duke, a former senior leader of the white supremacist group Ku Klux Klan.

He told CNN that he "didn't know anything about David Duke".

Later, however, he tweeted a video from an earlier press conference in which he appeared to recognise Duke's name immediately and said, "David Duke endorsed me? OK, I disavow".

Trump's retweet and remarks come ahead of the "Super Tuesday" showdown that will see primaries in 11 states and which the real estate tycoon's supporters say will seal the Republican nomination for him.

It is not the first time Trump has shared controversial tweets with his nearly 6.5 million followers.