In an unprecedented claim in United States politics, Donald Trump on Wednesday falsely asserted "fraud" in the counting of votes and said he would approach the Supreme Court to stop it, as the race between incumbent Republican president and his Democratic challenger Joe Biden was poised for a photo-finish. 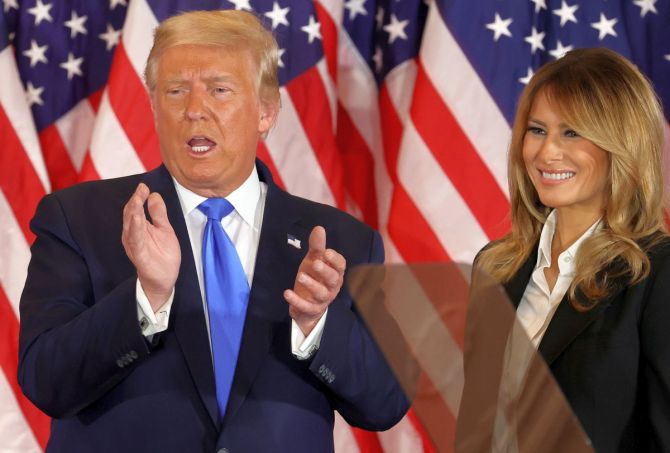 IMAGE: US President Donald Trump and US First Lady Melania Trump on election night in the East Room of the White House. Photograph: Chip Somodevilla/Getty Images

In one of the most divisive and bitter presidential elections in American history saw tight races in many key battleground states with Biden winning 224 electoral college votes and Trump closely behind with 213.

Fox News, considered to be the favourite news network of the president, gave him only 213 electrocal college votes while crediting 238 votes to Biden.

It also gave 50 per cent of the popular vote to the Democratic challenger and 48.4 per cent to Trump.

Trump called the election "a fraud on the American public" and said, "Frankly, we did win this election."

He also said he planned to take the battle to the Supreme Court to stop the counting of votes.

"All of a sudden everything just stopped. This is a fraud on the American public. This is an embarrassment to our country. We were getting ready to win this election. Frankly, we did win this election," Trump said, without citing any evidence of a fraud in the electoral process.

"We will win this, and as far as I'm concerned, we already have won it," Trump, 74, said in remarks to supporters in the White House East Room at 2 am.

"Our goal now is to ensure integrity, for the good of this nation. This is a very big moment. This is a major fraud on our nation. We want law to be used in a proper manner. So we'll be going to the US Supreme Court.

"We want all voting to stop. We don't want them to find any ballots at four o'clock in the morning and add them to the list," Trump said, amidst applause from his supporters.

"If the president makes good on his threat to go to court to try to prevent the proper tabulation of votes, we have legal teams standing by ready to deploy to resist that effort. And they will prevail," Jen O'Malley Dillon said.

"The president's statement tonight about trying to shut down the counting of duly cast ballots was outrageous, unprecedented, and incorrect. It was outrageous because it is a naked effort to take away the democratic rights of American citizens," Dillon said in a statement.

Trump was currently leading in other major battle ground states like Pennsylvania and Michigan where projections are yet to be made by the US media outlets.

A national race in which a record number of Americans voted amidst the COVID-19 pandemic is boiling down to just a handful of states: Arizona, Georgia, Wisconsin, Michigan and Pennsylvania.

Polls before the Election Day suggested possible outcomes ranging from a comfortable win for Biden, to a narrow victory for Trump where he loses the national popular vote but once again carries enough battleground states to win in the electoral college.

But Trump's decision to move the Supreme Court has brought uncertainty. The mainstream American media has criticised the president.

"No elected leader has the right to unilaterally order votes to stop being counted, and Mr. Trump's middle-of-the-night proclamation amounted to a reckless attempt to hijack the electoral process as results in key battleground states were still not final, something without precedent in American politics," The New York Times commented, criticising the president's move.

Trump's remarks added another bizarre twist to one of the most extraordinary election cycles in the nation's history, it said.

With millions of votes still being counted, the outcome of the race between Trump and Biden remained in flux, with the possibility that the winner would not be known for days, The Washington Post reported.

A short time before Trump spoke, Biden, 77, addressed supporters in his home state of Delaware.

Biden projected optimism but asked voters for patience. He pointed to Pennsylvania and Michigan, among other battlegrounds, as slow-counting states that he expected to win.

"As I've said all along, it's not my place or Donald Trump's place to declare who's won this election,” Biden said. "That's the decision of the American people. But I'm optimistic about this outcome."

"It ain't over till every vote is counted," Biden added.

Trump pointed out that he had impressive victories in Florida, Ohio and Texas. He said that he has already won in states like Georgia and North Carolina where his rivals cannot catch up in the rest of the counting of votes.

Arizona, which has been projected to be won by Biden, continues to be in play, he said, adding that he is winning big in Pennsylvania.

Alleging that his challenger (Biden) knew that they couldn't win, Trump said: “So they said, let's go to court. I have been saying this from the day I heard they were going to send out tens of millions of ballots. I said exactly because either they were going to win, or if they didn't win. They'll take us to court."

According to reports, there are more than 1.4 million vote-by-mail ballots left to count in Pennsylvania, and it could take days to tabulate them all.

The big cities in Michigan (Detroit) and Wisconsin (Milwaukee) are also yet to fully report, and they will heavily tilt toward the Democrats.

Meanwhile, Georgia is a wildcard. What seemed heading towards a comfortable Trump win earlier on Tuesday has ended up in a dead heat. 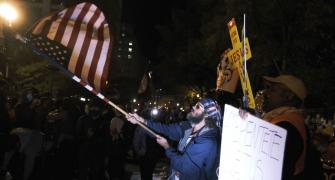 As US counts votes, protesters take to the streets 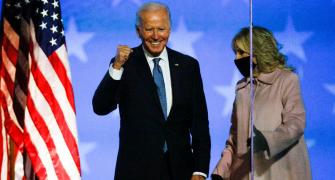 US elections headed into uncertain phase