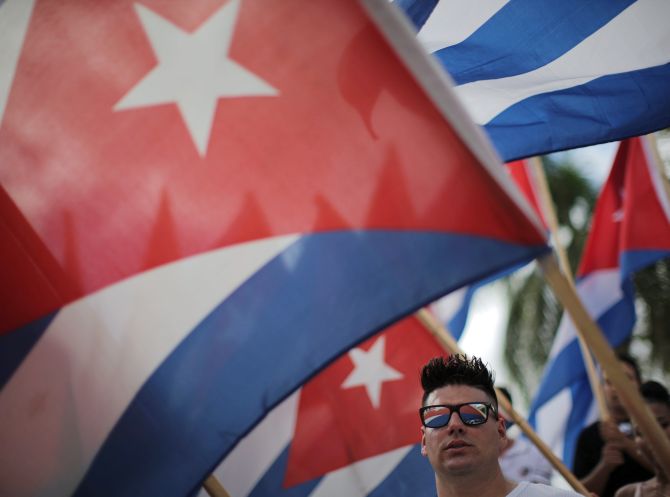 Obama had announced in December 2014 that he and Castro were restoring ties and less than a year later, the US Embassy in Havana was re-opened with the then US president making a historic visit to the Communist country in 2016.

Reversing the policy of pursuing a historic detente, Trump said, "Effective immediately, I am cancelling the last administration's completely one-sided deal with Cuba. I am announcing today a new policy just as I promised during the campaign."

"Our policy will seek a much better deal for the Cuban people and for the United States of America. We do not want US dollars to prop up a military monopoly that exploits and abuses the citizens of Cuba. Our new policy begins with strictly enforcing US law," he told a cheering crowd in Miami's Little Havana, the spiritual home of the Cuban-American community.

In Havana, Cuba's government criticised the new restrictions on ties with the US that were announced by Trump, but reiterated its willingness to hold a 'respectful dialogue' with Washington, DC.

Trump's speech, which came as the president signed a directive outlining his posture toward Cuba, is the latest attempt by the Trump administration to chip away at Obama's legacy, of which the Cuba policy of starting a historic detente was a major part.

Obama had pushed for expanding commerce and travel between the two countries.

However, Trump, in a complete reversal, asserted that he will not lift sanctions on Cuba unless it releases all political prisoners and respects freedoms.

"We will not lift sanctions on the Cuban regime until all political prisoners are freed, freedoms of assembly and expression are respected, all political parties are legalised and free and internationally supervised elections are scheduled elections," Trump said.

Trump asserted that the US will take concrete steps to ensure that investments flow directly to the people so they can open private businesses and begin to build their country's 'great, great future, a country of great potential'.

Trump said his actions bypassed the military and the government to help the Cuban people form businesses and pursue much better lives.

"We will keep in place the safeguards to prevent Cubans from risking their lives to unlawful travel to the United States. They are in such danger the way they have to come to this country. And we are going to be safeguarding those people," he said.

Trump said his administration will expose the crimes of the Castro regime and stand with the Cuban people in their struggle for freedom.

"Because we know it is best for America to have freedom in our hemisphere, whether in Cuba or Venezuela, and to have a future where the people of each country can live out their own dreams," he said.

He alleged that for nearly six decades, the Cuban people had suffered under the Communist domination.

To this day, Cuba is ruled by the same people who killed tens of thousands of their own citizens, who sought to spread their repressive and failed ideology throughout our hemisphere and who once tried to host enemy nuclear weapons 90 miles from our shores, Trump said.

"The Castro regime has shipped arms to North Korea and fuelled chaos in Venezuela. While imprisoning innocents, it has harboured cop killers, hijackers and terrorists. It has supported human trafficking, forced labour and exploitation all around the globe," Trump alleged.

"This is the simple truth of the Castro regime. My administration will not hide from it, excuse it or glamourise it. And we will never, ever be blind to it. We know what's going on and we remember what happened," he said.