Trump's visit to India to feature many firsts

Donald Trump's visit next week is the first ever stand-alone trip by a US president to India. 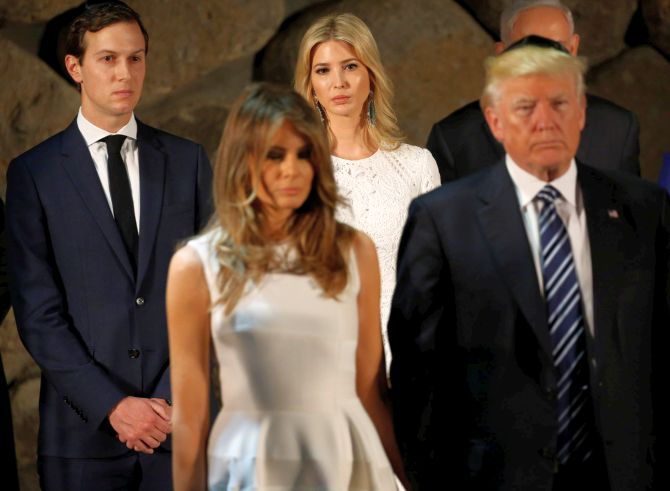 IMAGE: US President Donald Trump with US First Lady Melania Trump and his daughter Ivanka and son-in-law Jared Kushner will all be travelling to India for the two-day visit. Photograph: Jonathan Ernst/Reuters

When Air Force One touches down at Sardar Vallabhbhai Patel International Airport on February 24, he will become the fourth US president to visit India in his first term and the first to visit Gujarat.

America is already in an election mode with the Democratic party conducting their debates before picking their contender who will take on Trump in November of this year, hence these 36 hours will be in as sharp a focus in the US as in India.

Donald Trump also becomes the first American president to visit India with his wife and daughter and son-in-law in tow.

Bill Clinton came with daughter not wife, Obama came with wife and not children and so did George W Bush and Jimmy Carter.

Trump is known not to be too fond of traveling abroad; his visits to Asia have been few and far between. Hence, this visit in an election year is significant.

Trump's daughter Ivanka, a senior advisor to the US president, is no stranger to India, having visited Hyderabad in 2017. Her husband Jared Kushner is also an advisor to the president and crucial to the president's decision-making process. That all four of them are coming to India is extremely significant because the visit will be high on showmanship and drama.

Trump in his election year is keen to shore up as much goodwill as possible. He understands India well by now. The Howdy Modi event in Texas in 2019 must have gone a long way in clearing any doubts where Indian-origin Americans and Indians in India stand on India-US relations. It was Dr Manmohan Singh who said to George W Bush in 2008 , "The people of India deeply love you." And this when Bush was an object of ridicule in the rest of the world and Dr Singh is not known to be an effusive gentleman. But Dr Singh was right when he said, "When history is written, I think it will be recorded that President George W Bush played a historic role in bringing our two democracies closer to each other."

He was referring to the 123 nuclear deal, of course which ended India's nuclear isolation.

The US presidential visits before Bush were not significant at all. Eisenhower was about elephant rides, sandalwood garlands, Clinton was about the Taj, Agra and a Holi dance, Carters' visit was a blip that was forgotten post-Pokhran, Nixon's one day visit was bleeped out after his nastiness on Bangladesh and Indira Gandhi.

Obamas were the only ones who came twice in two terms, once during Dr Singh's tenure and once in Modi's first term.

It can safely be assumed that were Trump to win again, India will be high up on his agenda. He has a peculiar rapport with Modi. He jokes about him and mimics his English accent but seems to be quite taken in with the PM. Trump doesn't have many friends among world leaders. That he thinks of Modi as one is interesting.

Modi on his part is very demonstrative in his affection, hugging the American president whenever there has been an opportunity, clutching his hand and walking the stadium at the Howdy Modi event.

The media contingent traveling with Trump will looking beyond the drama and hype, they will look at tangibles even though expecting it from any administration in its last leg is quite unfair. But then who expects the media to play fair. Not in the US and not in India. India and the US are likely to finalise five pacts, including on trade facilitation, homeland security and intellectual property rights. 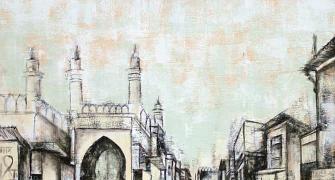 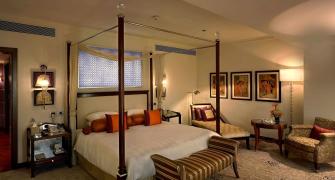