A car in which the survivor of Unnao rape case, her family and lawyer were travelling was hit by an over-speeding truck in Rae Bareli on Sunday, killing two members while leaving her and the advocate critically injured, police said. 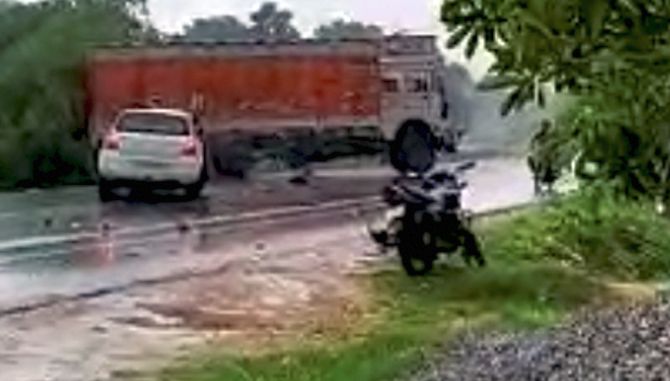 IMAGE: The car in which Unnao woman who had accused BJP MLA Kuldeep Sengar of raping her, was travelling during its collision with a truck near Rae Bareli. Photograph: PTI Photo

Bharatiya Janata Party MLA Kuldeep Sengar, who is an accused in the rape case, was arrested on April 13 last year.

Unnao Superintendent of Police Madhav Prasad Verma said the rape survivor, her paternal and maternal aunts along with their advocate met with an accident while on their way to meet her uncle, who is lodged in Rae Bareli jail.

The rape survivor's maternal aunt succumbed to injuries in a district hospital and the others were transferred to a trauma centre in Lucknow, police said.

Additional Director General of Police Lucknow Rajeev Krishna said, "Two women were killed in the accident. The rape survivor and the lawyer are in a critical condition and undergoing treatment at the trauma centre in Lucknow."

"The rape survivor's family had been provided security, but the gunner had not accompanied them on Sunday. The reason behind it is being probed," he said, adding, "The truck involved in the accident has been impounded. It has a Fatehpur district registration plate."

Verma said on the directives of senior officials, he along with the mother of the rape survivor, three sisters and brother were rushing to Lucknow.

The SP also said, "It has come to light that the gunner who usually accompanies the family (of the rape survivor) did not go with them. Why the gunner did not accompany them is being probed, and based on its outcome, action will be initiated accordingly."

Meanwhile, UP Congress leader Aradhana Mishra, who went to visit the injured on the directions of Congress general secretary Priyanka Gandhi Vadra said, "The rape survivor is in a very critical condition and the advocate is on ventilator. According to doctors, one person had died on the spot, while another was declared dead upon their arrival at the trauma centre."

"There were showers and the truck driver lost control over the vehicle which rammed into the car," he said.

The truck driver fled from the spot after the accident.

A woman belonging to Makhi police station area in Unnao had alleged that Sengar, a four-time MLA who represents Bangermau in the UP assembly, raped her teenage daughter at his residence in 2017.

The case had come to light after the victim allegedly attempted self-immolation outside Chief Minister Yogi Adityanath's residence.

A political battle has intensified over the issue with two former chief ministers of the state demanding investigation over the incident and Congress general secretary Priyanka Gandhi Vadra questioning the role of the BJP government.

Former UP chief minister and Samajwadi Party chief Akhilesh Yadav said, "We are demanding CBI investigation in Unnao accident and I will also raise the issue in the Lok Sabha. Our party's Rajya Sabha members will also raise it in the upper house".

Another former chief minister of UP, BSP chief Mayawati alleged of a conspiracy in the accident and demanded the Supreme Court to intervene.

"The accident of Unnao rape victim's car with a truck in Raebareli, prima facie looks like a conspiracy. Her two aunts have died and she along with her advocate is grievously injured. Supreme Court must take cognizance of the issues and must ensure strict action against the accused", she said.

Speaking on the same lines, Congress general secretary for UP East, Priyanka Gandhi Vadra also raised the question over the accident and the ongoing enquiry of the case.

Taking to Twitter, she wrote, "Road accident of the rape victim is shocking. Where has the CBI enquiry of this case reached so far? Why is accused MLA still in BJP? Why there is laxity in the security of victim and witnesses of the case. Without an answer to these questions, we cannot expect justice from BJP government." 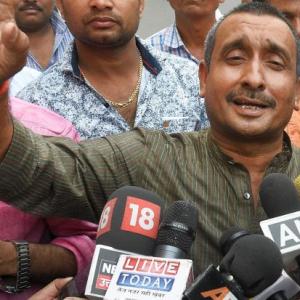 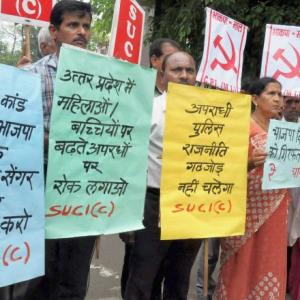