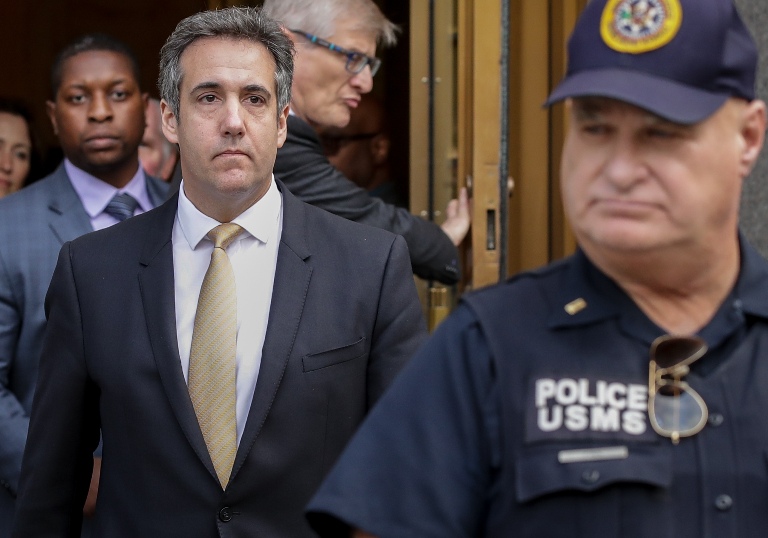 In a stunning admission that implicates Trump, his former lawyer Cohen pleaded guilty to buying the silence of two women about their alleged affairs with Trump.

Cohen, 51, pleaded guilty in the Southern District of New York to charges of tax evasion, making false statements to a federally-insured bank, and campaign finance violations.

The most-stunning admission he made in court before US District Judge William Pauley was that in 2016, Cohen had made payments of $280,000 (Rs 1.95 crore) to silence two women, who otherwise planned to speak publicly about their alleged affairs with a presidential candidate, thereby “intending to influence the 2016 presidential election”.

The presidential candidate here is Trump and the payments were to adult film actress Daniels and a former Playboy playmate, a clear implication of the president. Cohen’s sentencing is scheduled for December 12.

Cohen told the judge that the payments to the women were made “in coordination with and at the direction of a candidate for federal office” and “for the principal purpose of influencing the election” for president in 2016.

Trump has not been named by federal prosecutors in the charges against Cohen but has been identified as “Individual 1”.

The extraordinary admission came minutes after Trump’s former campaign chairman, 69-year-old Manafort, was convicted of five counts of tax fraud, two counts of bank fraud and one count of failure to disclose a foreign bank account. The jury was unable to reach a verdict on the remaining 10 counts, and the judge declared a mistrial on those charges.

The two cases arose from special counsel Robert Mueller’s investigation into Russian interference in the 2016 presidential election. Yesterday’s events represent a significant victory for Mueller, who has been under pressure from Trump’s supporters to wind up what the president calls a “witch hunt”.

The Virginia trial of Manafort did not delve into the nature of Trump campaign contacts with Russia, which is the focus of the Mueller investigation. But the conviction of a figure as prominent as Manafort, who ran the Trump campaign for a crucial five-month period in 2016, was a blow to the White House and a boost for the special counsel.

Prosecutors presented evidence that Manafort had lied in seeking personal loans and lied to the Internal Revenue Service in reporting income related to his political consulting work in Ukraine and elsewhere.

The outcomes of the two cases also raised grave questions about Trump’s judgment. Since his election, his national security adviser, personal lawyer, campaign chairman, deputy campaign manager and a foreign policy aide have all admitted or been convicted of crimes.

With two former aides to the president facing jail time, observers said the outcome of the separate, high-profile prosecutions could represent a turning point in Trump’s presidency in which the months-long investigations into his former dealings begin to leave a mark.

As the legal developments unfolded, Trump boarded Air Force One for the trip to Charleston, West Virginia, part of an all-out political strategy to keep the House and Senate in Republican hands in the midterm elections this year.

The stakes for Trump are now legal as well as political.

After landing in Charleston for the rally, the president said the Manafort verdict didn’t have anything to do with him.

“Paul Manafort is a good man,” Trump said. “It doesn’t involve me, but it’s a very sad thing.”

Trump, speaking to reporters on the tarmac, declined to answer questions about Cohen.

Rudolph Giuliani, the president’s personal attorney, said there were no allegations of wrongdoing against the president in the Cohen case.

“It is clear that, as the prosecutor noted, Cohen’s actions reflect a pattern of lies and dishonesty over a significant period of time,” Giuliani said.

Prosecutors said Cohen held the title of “executive vice-president” and “special counsel” to the owner of the company, “Individual-1”, who apparently is Trump. In January 2017, Cohen left the company and began holding himself out as the “personal attorney” to “Individual-1, who by that time had become the president of the United States”.

Democrats sought to pile political pressure on Donald Trump after the news broke, with the party’s leader in the House of Representatives, Nancy Pelosi, denouncing the “rampant corruption and criminality at the heart of Trump’s inner circle”.