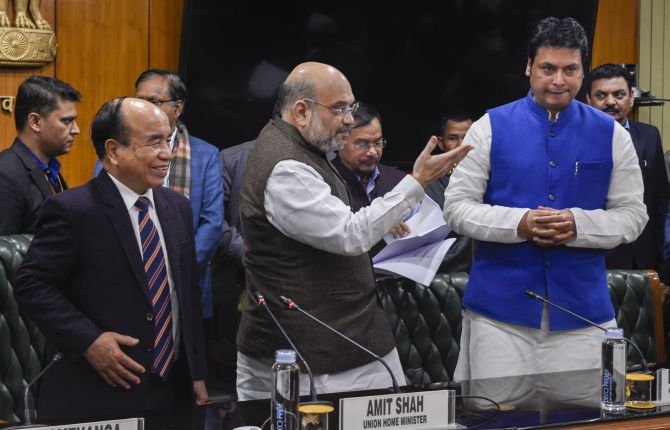 More than 30,000 displaced Bru tribals from Mizoram, who have been living as refugees in Tripura since 1997, will permanently settle in Tripura and an agreement was signed in this effect on Thursday.

The deal was signed by representatives of Bru, the central, Tripura and Mizoram governments in presence of Union Home Minister Amit Shah at North Block in New Delhi.

Under the agreement, over 30,000 Bru tribals will live in Tripura permanently, Shah said.

The Bru tribals have been staying in Tripura in different relief camps after they fled Mizoram in 1997 following ethnic clashes between Bru and Mizo communities.

An agreement signed in July 2018 for repatriation of the Bru tribals to Mizoram did not materialise as majority of the community members refused to go back to Mizoram. So far, only 328 families have returned and settled in Mizoram.

"A 23-year-old problem, which has been lingering for so long, has reached its logical conclusion. Under the leadership of Prime Minister Narendra Modi, we have been solving one after another complicated problem," Shah said.

Under the pact, Rs 4 lakh will be given to each Bru family in a fixed deposit account, Rs 5,000 per month for two years, a plot of land in Tripura and ration for two years.

For all such assistance, the central government will provide Rs 600 crore.

"The Bru people, who have been living in sub-human conditions in different camps, can now live in their own homes permanently. They will enjoy equal rights of any Indian living in Tripura with voting rights. They will now live honourably," Shah said.

Sarma, who was a key person in hammering out a solution between the Bru people and the governments of Tripura and Mizoram, said the conflict resolution exercise has been going on in the Northeastern region and Thursday's agreement was part of it.

"Some more good news are in the offing," he said without elaborating.

Zoramthanga said with this agreement, a long-drawn problem has come to an end.

Deb described the pact as 'historic' and thanked the prime minister and the home minister for its successful conclusion. 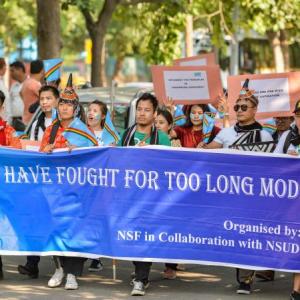