At least 19 people including Tripura Pradesh Congress Committee chief Birajit Sinha were injured in a clash between Congress and Bharatiya Janata Party supporters in front of Congress Bhavan in Agartala on Sunday. 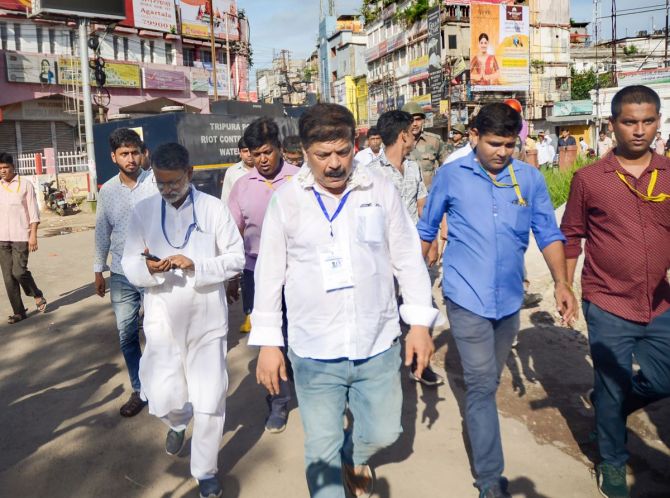 Police fired tear gas to disperse the mob, which clashed after the results of the by-elections for four assembly seats were declared. BJP won three seats and Congress one.

The entire Post Office Chowmuhani area where Congress Bhavan is located wore a deserted look after the clash.

"When they were preparing for lunch, a strong group of BJP supporters attacked Congress Bhavan. The Tripura Pradesh Congress Committee (TPCC) president was hit by bricks on his head while one Congress worker, identified as Romi Miah, was stabbed by BJP supporters," Congress media-in-charge Asish Kumar Saha said.

He alleged that BJP supporters led by a Yuva Morcha leader rained bricks on the building and damaged several motorcycles parked in front of it.

Information and Cultural Affairs Minister Sushanta Chowdhury, on the other hand, alleged that Congress supporters had first hurled bricks at BJP corporator of Agartala Municipal Corporation (AMC), Shilpi Sen, earlier in the day and that incident angered the party supporters.

"Around six of our party supporters were injured in the Congress-sponsored attack. They are trying to forge trouble after winning one out of four assembly seats in the bypolls. They are dreaming of returning to power with the help of CPI-M," he said.

Police said three people have been hospitalised but no FIR has been lodged so far.

"The TPCC president has been admitted to a private hospital. The Congress supporter who was stabbed is also undergoing treatment. One BJP supporter, identified as Bishal Chakraborty, received head injuries and was administered 12 stitches," a police officer said.

A Congress delegation led by Roy Barman met the West Tripura superintendent of police and submitted a deputation over the incident.

Chowdhury said BJP leaders have also met police officers and demanded action against those involved in attacks on the BJP corporator and others.