In controversial remarks, Trinamool Congress MP Kalyan Banerjee has equated Union Finance Minister Nirmala Sitharaman with a 'venomous snake' for her handling of the economy, drawing sharp reaction from the Bharatiya Janata Party which said Mamata Banerjee has lost control over her party leaders who are 'uttering nonsense' out of frustration. 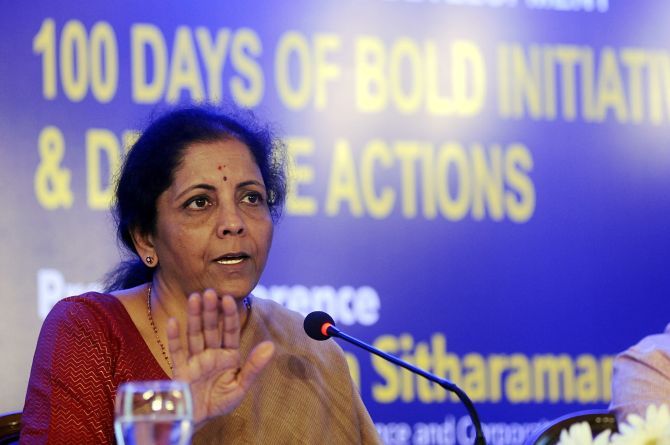 BJP national secretary Rahul Sinha said the party will lodge a first information report against the TMC MP for his comments that disparaged women.

Addressing a protest rally at Bankura against rising fuel prices and the proposed privatisation of trains on Saturday, Kalyan Banerjee demanded Sitharaman's resignation.

"Just like a 'kal nagini' (killer venomous snake) bites and kills people, her economic policies are killing the country's economy," he said.

The TMC Lok Sabha member also called her 'the worst finance minister' in the world.

"Corruption has spread in the TMC from top to bottom; they have become puzzled by internal feud and many of them are making senseless comments to divert the attention from the situation prevailing in the ruling party.

"We don't give much importance to such comments.... they are uttering such nonsense out of frustration," he said.

He had promised a new India and has done it by bringing down the GDP growth rate to 'abysmal' levels, the TMC lawmaker alleged.

"Mamata Banerjee recently sermonised people to maintain dignity of language in political discourse. Is this the kind of language that should be used against a lady? He is an advocate. Is this the language of an advocate? He has disparaged all women with his remarks," Sinha said.

"He comes from a state where Goddess Durga and Goddess Kali are venerated. Mamata Banerjee is a woman and she should take action against her MP for his misogynistic comments. But I don't think she will," Patra told India Today news channel.