West Bengal's industry minister Partha Chatterjee, arrested in the SSC scam, should be removed immediately from his post and expelled from the Trinamool Congress, the party's state general secretary Kunal Ghosh demanded on Thursday. 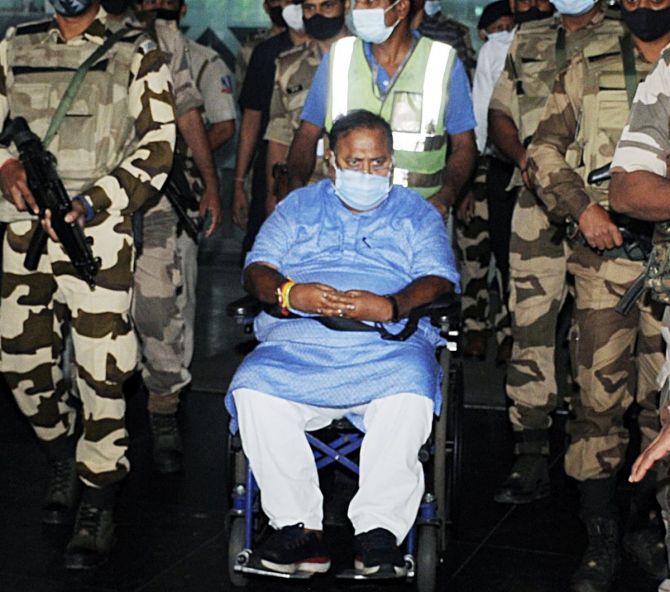 Nearly Rs 50 crore in cash, and gold believed to be in kilograms were recovered from apartments linked to Chatterjee, besides documents of properties and foreign exchange, as per officials of the Enforcement Directorate which arrested him.

'Partha Chatterjee should be removed from ministry and all party posts immediately. He should be expelled. If this statement considered wrong, party has every right to remove me from all posts. I shall continue as a soldier of @AITCofficial (TMC),' Ghosh, also the party's spokesperson, tweeted.

Later, he said that he has full faith in Chief Minister Mamata Banerjee and TMC national general secretary Abhishek Banerjee.

"I think they will take the appropriate decision," he said.

The comment came amid the opposition Bharatiya Janata Party and Communist Party of India-Marxist's attack on the TMC government in the state for not taking any action against Chatterjee even as huge amounts of cash were recovered.

On Wednesday, Ghosh said that hoped the TMC leadership would take note of the public perception as the recovery of cash brought 'disgrace' to the party and 'shame to all of us'.

Reacting to the statements, BJP spokesperson Samik Bhattacharya claimed that the TMC was trying to distance itself from Chatterjee.

"All these years, he was a powerful minister and a party leader. Now, as he has been arrested, the TMC is trying to distance itself from him. The TMC is trying to make him a scapegoat. The money trail has to be investigated," he said.

The chief minister recently said that if someone is found guilty, she would not spare that person even if he is a minister.

Chatterjee, also the secretary-general of the Trinamool Congress, was arrested on Saturday in the SSC scam.

The CBI, as directed by the Calcutta High Court, is probing the alleged irregularities in the recruitment of Group-C and D staff as well as teachers in government-sponsored and aided schools on recommendations of the West Bengal School Service Commission (SSC).

On Tuesday, his official car was taken back by the state assembly.

TMC's mouthpiece Jago Bangla (Wake up, Bengal) has stopped naming him either as a minister or the party's secretary-general.