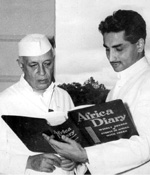 Last week after a memorial service for my father, his younger sister and her husband sat with my brother and me recounting tales about Partition -- stories that many Punjabi (Hindu, Sikh and Muslim) family members of that generation sometimes narrate in homes in India and Pakistan.

My aunt was seven years old in 1947, so her memory has been aided by what she learned from her mother. My paternal grandfather had a BSc from Forman Christian College in Lahore, but he was a small landlord. At the time of Partition he did not leave his home in Jhang. My aunt recalled that her father was killed on August 30 by one of his Muslim neighbours. It was that kind of time.

My father was 19 at that time, also studying in the Forman Christian College. After my grandfather's death, the family -- my grandmother, my father, his brother who was 12 and my aunt -- first moved to Multan, and a month later they took trains, heading to Delhi.

Earlier that afternoon at my father's memorial, his brother also spoke about those trains, where Hindu and Muslims were killed in equal number by hysterical mobs. We have seen those horrific scenes recreated in Richard Attenborough's Gandhi and Deepa Mehta's Earth.

Likes millions of refugees from Partition, my father made a life for himself and his family in Delhi, along with supporting his younger brother and sister.

On December 16, my father passed away in Delhi at the age of 84 after a prolonged illness.

He had lived a full life. He gave me a history that was rarely discussed at home. And he gave me a present that is rich, exciting and continues to define who I am.

India was a young nation in the late 1940s and early 1950s. Despite the tragedy of Partition there was a lot of idealism infused by the leadership of Jawaharlal Nehru. My father became an adult in that era and much of his career was a reflection of the time. In Delhi my father completed his BSc and then an MA in political science, both from Punjab University. He then made two major career choices -- attending a journalism programme and then working towards another master's degree in African studies at Delhi University.

After India's Independence, Jawaharlal Nehru's foreign policy was focused on assisting other countries in their fights against colonialism. Delhi University's African Studies department was established with that goal in mind and my father was one of the first students in the programme.

Africa became the focus of my father's life. He took his first trip to the continent in the late 1950s, visiting the British colony of East Africa (later broken into three countries -- Kenya, Uganda and Tanzania). And he was in Addis Ababa in 1963 for the establishment of the Organisation of African Unity.

In the files that he left behind I found copies of letters and even a telegram from Henry Kissinger inviting my father for an international affairs seminar at Harvard University in 1960.

A few years later, Kissinger (long before he joined Richard Nixon's White House) visited India and my father became his guide, arranging seminars, and meetings with other Indian journalists and university professors.

As my father engaged himself more and more with Africa -- visiting the continent on many occasions -- our home evolved into a base for visitors from various African countries. There were politicians, scholars, writers, playwrights, diplomats and freedom fighters.

For years my father made close friends with members of South Africa's African National Congress, many of them living in exile in England and other African countries. He helped the ANC secure its first office space in Delhi.

One ANC member -- Frene Ginwala, a South African journalist of Indian origin who was working on her DPhil from Oxford University -- came and stayed with us in Delhi for a few months in the 1970s. I remember her to be a fun woman who performed magic tricks for my brother's birthday.

Many years later, one evening in 1994 in New York, I sat watching on C-SPAN the inauguration of Nelson Mandela as independent South Africa's first President. Suddenly, I spotted Ginwala (or Frene Aunty as we called her) standing behind Mandela in her usual Gujarati-style sari. Ginwala had been elected as the first Speaker of independent South Africa's National Assembly. She held the post until 2004.

In 1961, my father launched Africa Diary -- a weekly record of news from Africa. The digest of news was an important tool for researchers and scholars from around the world. He also launched another scholarly magazine -- World Focus, a monthly publication that had experts debate one international topic in each issue.

He wrote opinion pieces for several publications in India and abroad. He was a frequent contributor to All India Radio's Spotlight show. I have memories of sitting quietly over the dinner table while a commentary piece by my father would be read by one of AIR's on-air announcers.

When I was young I would not understand the issues my father would raise in his commentaries. But even then I had a sense of how important his work was.

He authored a few books on Africa. His 1997 book South African Foreign Policy included a foreword by Nelson Mandela, whom he met and interviewed a number of times after South Africa's independence.

I learned a lot from my father -- beyond the world of Africa that so consumed his life. He played tennis, a sport he picked up in Delhi and played for decades. I never played tennis or any other sport, but just to please him I would sit and listen to Davis Cup commentaries on the radio. And I learned names of tennis players -- Jaideep Mukherjee, Premjit Lal and Ramanathan Krishnan, and later about the successes of the Amritraj brothers from my father.

From my teenage years I liked films and my father would sometimes make it a family trip to the movie theatre. But we would often argue after watching a film, an indication that we had different sensibilities.

I remember seeing Satyam Shivam Sundram with my father during a trip to Srinagar in the late 1970s. He thought the film was marvelous. I thought that despite the wonderful songs, the film was crass, mostly sexist. To my father, Raj Kapoor was a master and it was wrong to question his vision.

But on rare occasions we did agree on films -- Hare Rama Hare Krishna and Garam Hawa, a story close to his heart.

As father and son, we differed and argued. But I became a journalist like my father, although against his wishes. He spent his lifetime writing about Africa, supporting the continent's desires to stand up against injustice.

Watching him work, I learned to be tolerant, secular and liberal, values that now define who I have become.

My father had been unwell for a while. In the recent his mind was often lost in a fog, the result of a strange and incomprehensible illness called Alzheimer. I would visit India at least once a year and during the last few trips I saw a progressive decline in his condition. It was sad to see a man, who was once a giant, reduced to half of his size.

But looking at him I understood the meaning of life, that all bright lights have to dim some day and all good lives lived have to slow down and then end.