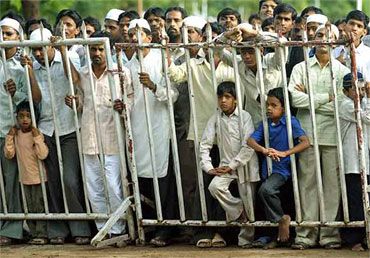 The prosecuting agency, the National Investigation Agency, submitted a list of 286 witnesses which include doctors, police officers, forensic experts and panch witnesses.

The agency also submitted over 200 documents in support of its case.

Judge Vinod Padalkar, presiding over the special NIA court, accepted the witness list and documents and posted the matter for further hearing on November 12.

The court had on October 30 framed charges in the case against all the seven accused for terror activities, criminal conspiracy and murder, among others.

The accused face trial under sections of the stringent Unlawful Activities Prevention Act (UAPA) and the Indian Penal Code.

The judge, while reading out the charges against the accused on October 30 had said, "The Abhinav Bharat organisation was formed with the common object to spread terrorism and a bomb with RDX was planted on a motorcycle in Malegaon that killed six persons and injured 101 others.”

“The accused persons came together to hatch a conspiracy to commit a terrorist act and procured explosives to further their conspiracy," Padalkar had said.

According to the prosecution, the accused had formed the right-wing organisation and held meetings under its name at various places in the country, where the alleged conspiracy was hatched.

The NIA, after taking over the case, had filed a charge sheet in 2016 giving a clean chit to Sadhvi and three others -- Shyam Sahu, Praveen Takalki and Shivnarayan Kalsangra -- saying it found no evidence against them and they should be discharged from the case.

The NIA court, however, absolved only Sahu, Kalsangra and Takalki and ruled that Sadhvi will have to face the charges.

At that time, the special court had dropped stringent charges under the Maharashtra Control of Organised Crime Act (MCOCA) against the accused, but had said they will face charges under the UAPA and other sections of the IPC, including murder and criminal conspiracy.