'Tri Valley University students are in for a long haul'

Three weeks after they lost their visa status to be in the US, more than 1,000 Indian students from the Tri Valley University (TVU) are in for a "long haul" though the Indian government has raised the issue at the highest level.

Many of the students from the California-based TVU, which has been shut down on charges of massive visa fraud, said they are stuck here without any concrete plan to get out of their dilemma.

Noting that the situation was very complex, Susmita Gongulee Thomas, the Consul General of the Indian Consulate in San Francisco said the students of the TVU, were in for a "long haul".

"It is not going to happen and closure will happen in 2 or 3 months. I feel, definitely it would be much longer than that may be 6 or 7 months or 8 months", she said.

But definitely there is a lot of hope and a lot of students whom we can possibly help to reinstate themselves and to get back to studies," Thomas said.

Speaking on condition of anonymity a student said, "We don't know what to do. We want to get our visa status back and remain in the country. We have spent too much of our parents' money to go back".

Krishna said that India was pushing the US on two fronts -- the first to "safeguard the interest of the affected students" and second to "inquire into the dubious status of the university and bringing to book those responsible for perpetuating the scam".

"We have taken it up with authorities in the US at the highest level," he said.

According to a federal complaint filed in a California court in January, the University helped foreign nationals illegally acquire immigration status. The university is said to have 1,555 students. As many as 95 per cent of these students are Indian nationals, the complaint said.

Investigations by Immigration and Customs Enforcement (ICE) have found that while students were admitted to various residential and on-line courses of the university and on paper lived in California, but in reality they "illegally" worked in various parts of the country as far as Maryland, Virginia, Pennsylvania and Texas.

On Saturday, Krishna accompanied by Foreign Secretary Nirupama Rao met India's ambassador to the US Meera Shankar and Thomas to discuss the matter.

Krishna said that Indian government team here would push the US government to deal with the students not just "legalistically" but "on humanitarian considerations.

While the students insist they were duped by TVU and haven't violated any laws, the US authorities are asserting that these students were illegally working in the US

and not attending classes.

While Krishna described these students as "gullible" and "innocent", others have pointed out that students, who were investing so much money, could not have been so dense to fall for the scam without some knowledge of what they were getting into.

The students, however, said that everything on the TVU website checked out okay.

The students asserted that they have been taken for a complete ride by Susan Su, the head of the fraudulent institution, who convinced them it was okay to work in different parts of the country while on the student visa.

Recently, 18 students in California were radio-tagged by ICE as part of their investigation against Tri Valley University.

Ankle monitors send a radio frequency signal containing location and other information to a receiver.

US immigration authorities have removed radio tags from the ankles of two Indian students.

Consul General Thomas noted that unfortunately the students who got tagged were probably the most innocent since they were in California and had only violated the law of physically not attending the classes.

The students, however, insist that they were attending three online classes each week.

"There were classes online and professors from other universities were also teaching," one student said.

The students, Thomas noted, who remained in California would probably be allowed to transfer to other universities but those who had moved to other states would be seriously penalized. Now, the US authorities have offered some options to the students.

They could try and get admission in another university and then try for "reinstatement" of their visa status, which is not guaranteed since it would depend on whether the student broke laws and which ones.

Also, going for this option means hiring a lawyer who will need to be paid. Another option is to leave the country but this would damage chances of re-entering the US.

The Indian officials want that all the students should not be branded guilty as their cases should be assessed one-by-one since all their situations are different.

It is probable that if any Indian students were in collaboration with Su in the Ponzi scheme would be deported since they taking the risk knowingly.

"We are however convinced that the majority of the students were victims," said Thomas.

Meanwhile, out of the more than 1000 Indian students from the fraudulent university who are out in the US, only around 200 students have got in touch with the Indian consulates in the US.

"Others do need to hurry up and get in touch with us so that we can start analyzing their situations and move them ahead, said Thomas.
Source: PTI© Copyright 2021 PTI. All rights reserved. Republication or redistribution of PTI content, including by framing or similar means, is expressly prohibited without the prior written consent.
Related News: Tri Valley Univ, M Krishna, Susmita Gongulee Thomas, US Meera Shankar, Immigration and Customs Enforcement
SHARE THIS STORY
Print this article 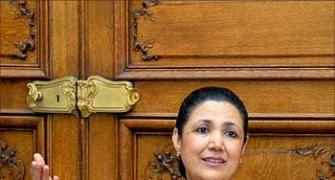 US: Indian ambassador patted down at airport