Members of Left wing student organisations squatted on the tracks disrupting movement of trains while activists of another outfit vandalised an ambulance and burnt tyres during a bandh called by Left parties in Bihar on Thursday. 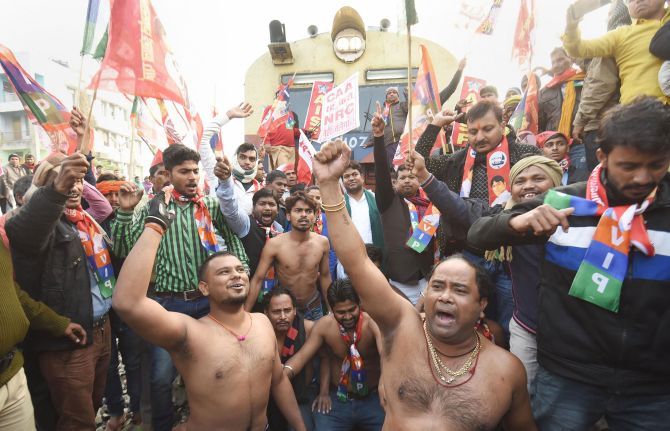 IMAGE: Vikassheel Insaan Party (VIP) president Mukesh Sahni and his supporters block a railway track at Rajendra Nagar Terminal during a protest against the Citizenship (Amendment) Act, National Register for Citizens and crime against women in the state during Bihar Bandh, in Patna, on Thursday. Photograph: PTI Photo

The bandh, also being supported by a number of small parties, has been called in protest against the Citizenship Amendment Act and the proposed countrywide implementation of National Register of Citizens.

WATCH: Members of AISF stop a train in Patna during anti-CAA protest

In the state capital, activists belonging to pro-Left student bodies like All India Students Federation and All India Students Association stormed the Rajendra Nagar Terminus and squatted on the tracks disrupting movement of trains for about half an hour early in the morning.

Railway sources said traffic was restored after the protesters were chased away by Railway Protection Force personnel.

The station witnessed fresh disturbance around 10 am when hundreds of activists of Jan Adhikar Party, floated by former MP Pappu Yadav, burnt tyres on the road
adjacent to the Rajendra Nagar Terminus and some of them squatted on the tracks.

They also vandalised an ambulance which tried to make its way through the road and head towards a residential locality nearby. Police and RPF personnel were trying to disperse the agitators.

In Jehanabad, which has been a stronghold of the ultra-Left movement in Bihar, Communist Party of India-Marxist-Leninist activists staged a roadblock on Kako More, disrupting traffic on national highways NH 110 and 83.

CPI-ML cadres also staged a demonstration close to the block headquarters at Musahari in Muzaffarpur, disrupting plying of vehicles between the district and adjoining
Samastipur.

Communist Party of India-Maoist activists squatted on the tracks near Laharia Sarai station in Darbhanga district, affecting movement of trains for some time.

On the Mahatma Gandhi Setu over the Ganges close to the state capital, JAP supporters all males performed ribald dances to the tune of Bhojpuri songs donning saris, as stranded commuters looked on with a mix of bemusement and exasperation. 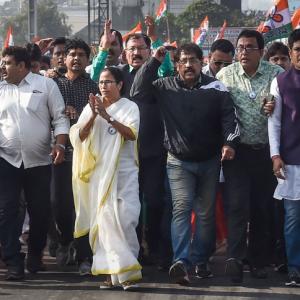