A top Lashkar-e-Tayiba commander was among two terrorists killed in an overnight encounter in Jammu and Kashmir's Shopian district, police said on Monday. 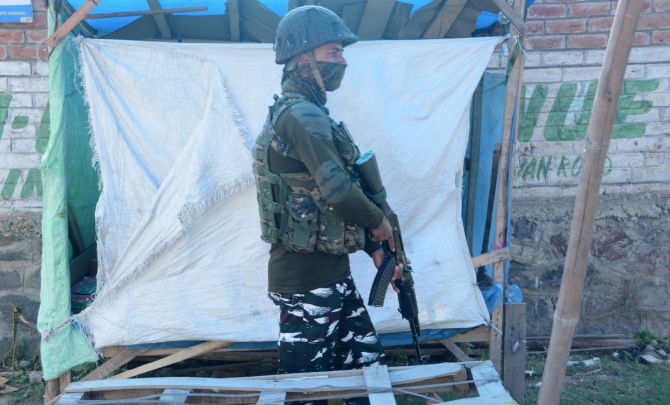 IMAGE: A security personnel in action during the encounter in Shopian. Photograph: Umar Ganie for Rediff.com

Ishfaq Dar alias Abu Akram, was not only responsible for attacks on security forces, but also for civilian killings, they said.

Acting on specific information about the presence of terrorists in the Check-i-Sidique Khan area of the south Kashmir district, security forces launched a cordon and search operation there at night, a police spokesman said.

During the operation, as the presence of terrorists got ascertained, they were given repeated opportunities to surrender, he said.

The terrorists, however, fired indiscriminately on security forces' personnel, which was retaliated, leading to an encounter, the spokesman said.

In the encounter, two terrorists of the proscribed Lashkar-e-Tayiba (LeT) were killed and their bodies were retrieved from the site of the encounter, he said.

One of the terrorists was identified as Ishfaq Dar alias Abu Akram, a top commander of the LeT, Director General of Police (DGP) Dilbag Singh said.

Dar was active since 2017 and responsible for a very large number of terror crimes, including attacks on and killings of police, security forces' personnel and civilians, Singh said.

He said the other terrorist has been identified as Majid Iqbal Bhat.

The spokesman said according to police records, the killed terrorists were part of groups involved in various terror crime cases and several such cases were registered against them.

"Dar figured among the list of most wanted terrorists and besides being part of groups involved in several terror crime cases. He very instrumental in planning and executing terror attacks on security establishments, civilian killings and misleading the gullible youth by motivating them to join terrorist folds," he said.

Dar was also involved in killing of four police personnel at Zainapora in December 2018 and killing of two non-local drivers in Chittrigam in Shopian in October 2019, the spokesman said.

"At his behest, two youths namely Asif Lone, a resident of Khudwani in Kulgam and Ab Rashid Thoker, a resident of Hussanpora in Arwani, joined terrorist ranks," he added.

Incriminating material, arms and ammunition, including two AK-47 rifles and eight magazines, were seized from the site of the encounter, the spokesman said.

He said Inspector General of Police (IGP), Kashmir, Vijay Kumar, congratulated the joint team of police and security forces for conducting a successful operation in a professional manner by neutralising the most wanted militant without any collateral damage.