IMAGE: An army personnel takes position during an encounter in Shopian, Jammu and Kashmir on Monday. Photograph: Umar Ganie/Rediff.com

In a double breakthrough, security forces killed three top Hizbul Mujahideen terrorists, including its chief recruiter Zahid, in an encounter in Shopian and a top Jaish-e-Mohammed commander in the Baramulla district of Jammu and Kashmir on Monday, police said.

An Army jawan also died in a brief encounter with terrorists in the Budgam district of the state.

The gunned down Jaish terrorist is believed to be the mastermind of the recent attack on a Border Security Force camp near the airport in Srinagar, they said.

Security forces launched a cordon and search operation in the Ladoora area of Baramulla district following information about the presence of terrorists, an official said.

The operation turned into a gunbattle when a search party was fired upon, he added.

In the retaliatory action, one terrorist -- identified as Khalid alias Shahid Showkat of the JeM -- was killed, he said. 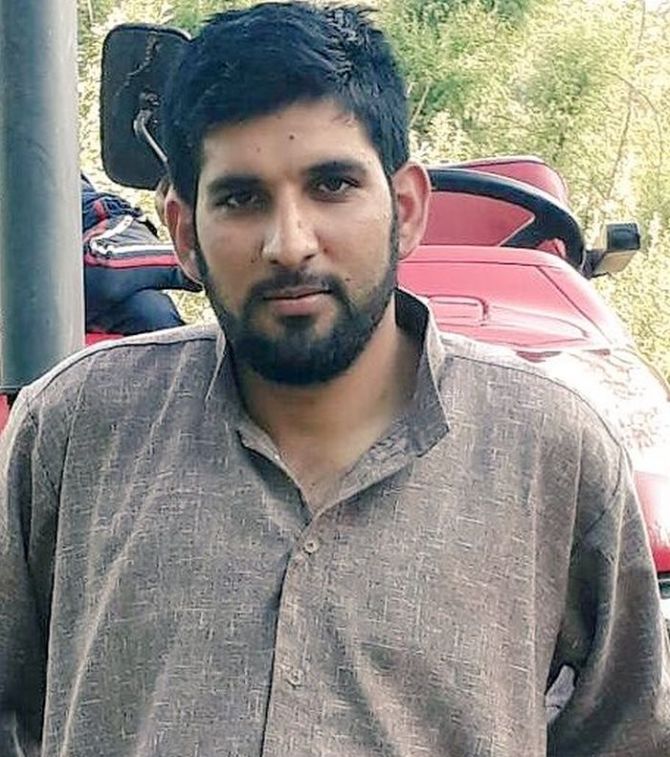 He was the mastermind of 'fidayeen' (suicide) attacks on the BSF camp near the Srinagar Airport earlier this month and on the district police lines in Pulwama last month, a police spokesman said.

"He was also involved in a fidayeen attack on 46 RR Army Camp at Khajabagh, Baramulla in 2016," he said.

Khalid was constantly exploring the opportunities to attack security forces and establishments, the spokesman said, adding that the killed terrorist would incite young boys to join his outfit to carry out grenade attacks on behalf of Pakistan-based commanders for monetary benefits.

"He was involved in the recent attack on an SPO named Altaf Ahmad Khan at Hajin Handwara in which the SPO along with his son were seriously injured. He was also involved in the killing of tower guard Eidul Amin Mir at Behrampora, Sopore," the spokesman said.

The JeM terrorist was involved in three other killings as well, he added.

Meanwhile, three Hizbul Mujahideen terrorists were killed in a separate gunbattle with the security forces in the Keller area of Shopian district, police said.

Those killed included Zahid, the chief recruiter of the Hizbul Mujahideen in the Kashmir Valley, an official said. The other two have been identified as Irfan and Ashif, he said.

In another encounter in the Budgam district, a soldier was killed.

A Junior Commissioned Officer was killed in a brief encounter with terrorists in the Khag area of Budgam, an Army official said. The slain soldier was identified as Subedar Raj Kumar.