Took this step to save locals, says Major who tied man to jeep 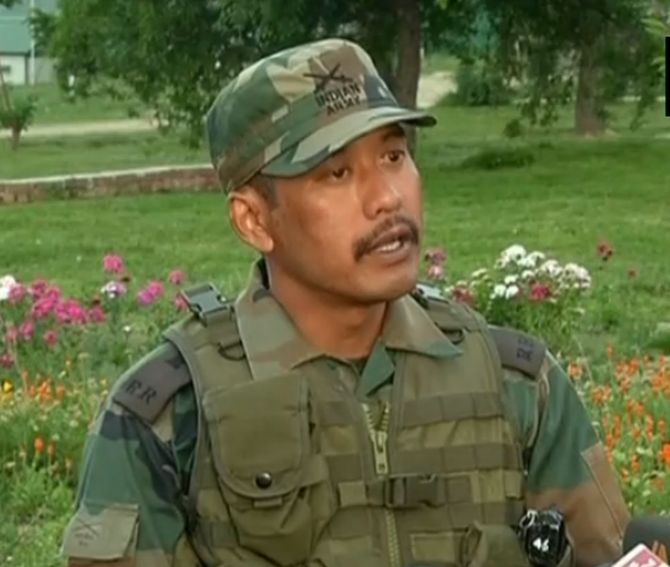 At the centre of a controversy, Major Leetul Gogoi on Tuesday appeared before the media to say that his action of tying a man to a jeep as a shield against stone-pelting last month was intended to save the lives of many people.

Breaking his silence, he said about 1,200 stone-pelters had surrounded a small group of security personnel at a polling booth in Utligam village of Budgam district on April 9 and if he had ordered firing, there could have been at least 12 casualties.

Gogoi, who was commended by the Army chief on Monday, said he and five other army personnel had gone to that polling booth after a ‘distress call’ about a small group of Indo-Tibetan Border Police personnel and few members of the polling staff being surrounded by a big crowd of about 1200 stone-pelters.

The mob, which included women and children, was threatening to set ablaze the polling booth, he said.

Amidst the mob, he said he saw a man who appeared to be the ‘ring leader’ as he was ‘instigating’ the stone-pelters at Utlgam, about 20 kms from his residence, on the day of bypoll to Srinagar Lok Sabha constituency on April 9.

He said the idea of tying the man, who was identified as Farooq Ahmad Dar, to the jeep had struck him suddenly as a means to evacuate the polling staff and the paramilitary personnel, besides avoiding any casualties.

He said after Dar was tied to the jeep, the stone-pelting stopped for some time, providing a window to them to leave that area safely.

“This thing I have done only to save the local people. Had I fired, there would have been more than 12 casualties... With this idea, I have saved many peoples’ lives,” Gogoi told reporters at his Beerwah camp in Budgam district, giving details of the incident.

He spoke to the media on the incident on a day the Army said it had destroyed Pakistani posts across the Line of Control in Nowshera sector in a ‘punitive’ action.

Talking about Dar, Gogoi said, “He tried to flee on a bike but somehow, despite intense stone pelting and getting hurt, we caught hold of him.”

He said after catching Dar, the army personnel moved towards the polling station with the help of mine-protected vehicle.

“Once we got inside, I rescued four civil polling staff, seven ITBP personnel and one J&K Police constable,” he said.

The officer said while they were leaving the polling station, their mine-protected vehicle got stuck in the mud.

“On seeing us, the mob again resorted to stone-pelting. At that time, an announcement was made in the mob ... The civilians had started gathering and they were more violent. They even threw a petrol bomb at us but somehow the petrol bomb did not explode,” he said.

Gogoi said he ordered his men to somehow take out the vehicle from the mud, which they managed to do.

“In the meantime, again I announced through my megaphone that give us a safe passage so that we can move out from the area but the crowd was not listening to us.

"At that moment, suddenly the idea of tying him (Dar) to the vehicle came to my mind. As soon as I ordered my boys to tie him up on the vehicle, the stone-pelting stopped for a while and that was a fraction of the moment where I got a window to come out safely from that place and immediately I informed all my boys to get inside the vehicle and we moved out from that area,” he added.

Gogoi’s appearance before the media came a day after he was awarded Chief of Army Staff’s Commendation Card for his sustained efforts in counter-insurgency operations.

An army court of inquiry and a separate police investigation into the incident is still going on.

Major Leetul Gogoi, who had tied a man to a jeep as a shield against stone-pelting, saved lives under ‘exceptional circumstances’ and the Army has appreciated it, Information and Broadcasting minister M Venkaiah Naidu said on Tuesday.

“The action of the Major was taken in exceptional circumstances and the Army has appreciated him. He wanted to save the lives of the Indian citizens including officers who were on election duty,” Naidu said.

He said that the elements who supported and funded stone-pelters in Kashmir stood exposed.

“People know who are behind stone pelting in Kashmir. Who is funding them is all exposed by the media. For political reasons, the National Conference is trying to sympathise with such people by criticising the government and Army,” Naidu said.

Kashmir is an integral part of India and every Kashmiri is an Indian citizen, the Union minister said.

Backing Major Gogoi, Punjab Chief Minister Amarinder Singh has said he would have done the same had he been in his place.

Singh, who served in the Army in the mid 1960s, said Major Gogoi exemplified a high level of presence of mind and daring, and that the Army cannot be expected to deal with such ‘stone-pelting mobs with one hand tied behind their backs’.

The chief minister lashed out at those asking for the officer’s court-martial, saying they clearly had no inkling of the way the Army works and the traditions which continue to make it a unique institution rooted in a distinctive culture of valour and courage.

Singh, who was the first to demand an award for the daring Major, hailed the Army for backing him despite criticism in certain quarters of his action ‘as it was important to send out a strong signal to show that the Indian Army was neither weak nor were our officers underdogs’.

While he upheld the importance of human rights in a civilised society, Singh asserted that human rights could not be allowed to be used as a shield for lawlessness.

The security personnel who risk their lives every day for protecting the common people of the land also have human rights, he said.

Award to Maj Gogoi a matter of Pride: Jitendra Singh

The honour given to Major Gogoi is a matter of pride for all patriotic Indians, Union minister Jitendra Singh said.

He said in the recent past, an atmosphere of fear was being created by certain persons to make people believe that those who abuse India are the ones who are only talked about.

"So there were people, who kept faith in patriotism, had to face disappointment. Such an announcement (of rewarding the Army officer) at this time has led to the feeling of pride and honour of the people. We are entirely indebted to the Indian Army,” said Singh, minister of state in the Prime Minister’s Office.

Addressing a press conference, Singh said the honour to the Major was the country's way to show its reverence to the Army's professional aptitude and commitment. 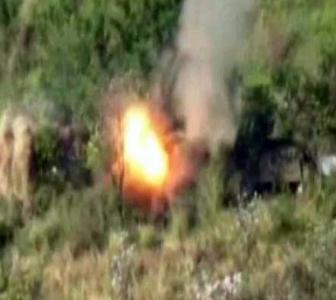 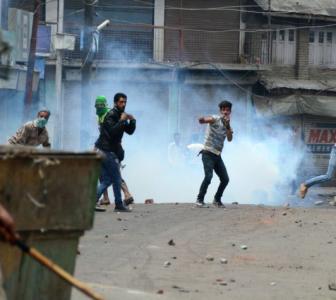 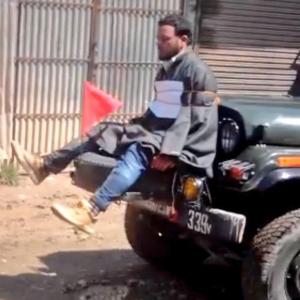