News
Business
Movies
Sports
Cricket
Get Ahead
Money Tips
Shopping
Sign in  |  Create a Rediffmail account
Rediff.com  » News » Pak Army says it is 'too busy' to get involved in politics

The Pakistan Army on Wednesday said that it was "too busy" in matters of national security to get involved in any political issue, apparently referring to the massive protest led by Jamiat Ulema-e-Islam Fazl leader Maulana Fazlur Rehman demanding the ouster of country's Prime Minister Imran Khan. 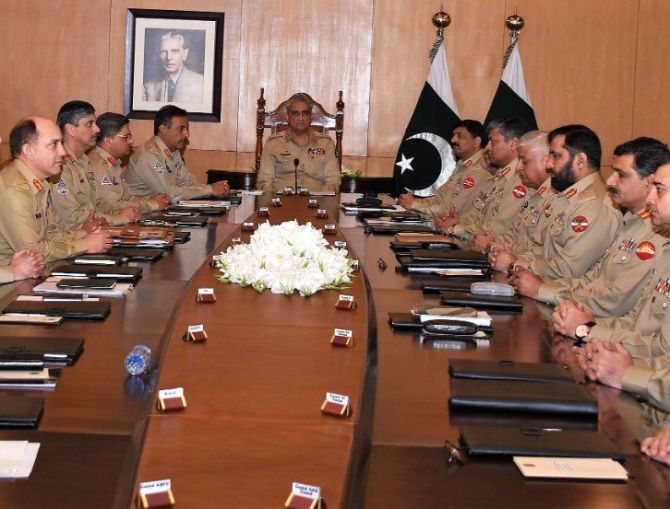 Maj Gen Asif Ghafoor, Pakistan Army spokesman, made the comments in an interview to Hum news channel when asked if the army chief will mediate in the ongoing demonstration by the cleric-cum-politician Rehman.

Rehman is leading the massive protest, which entered the sixth day on Wednesday. Dubbed as 'Azadi March', the protestors demand Prime Minister Khan's resignation, accusing him of "rigging" the 2018 general elections.

Rehman said the anti-government sit-in was staged with a view to fulfil a "national responsibility" and for which "much effort and resilience" has been exercised.

Ghafoor told the channel that army had nothing to do with the politics of sit-ins.

“We are too busy in matters of national security and defence to become involved in things like these and respond to these allegations,” he said.

When asked if army chief would try to resolve the ongoing dharna against the government, he said, "the dharna is a political activity which the army as an institution has nothing to do with.”

He rejected the impression that army was against the government when Imran Khan staged a similar sit-in in 2014 and said that the military had supported the government.

“It neither has any role in the country's electoral process nor has it any desire to do so,” he said.

In its list of demands, the Rehbar Committee sought the premier's resignation and fresh elections in the country without the supervision of the armed forces.

The government, on the other hand, has demanded that the committee end the sit-in.

Meanwhile, Punjab Assembly Speaker Chaudhry Pervaiz Elahi met Rehman to convince him to end the protest. He told reporters that positive progress was made in the talks.

The protestors camping at Peshawar Mor area of Islamabad braved heavy rain, chilly winds and cold weather but refused to disperse until asked by Rehman.

Rehman on Monday asked his supporters to continue their anti-government protest with "perseverance" and "courage", as the 48-hour deadline set by him for Prime Minister Khan's resignation expired.

He said the movement to oust the prime minister "will continue to move ahead and will never be on the back foot".