Tomar did not graduate from our varsity: RML Awadh University 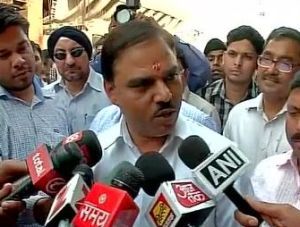 In more trouble for former Delhi Law Minister Jitender Singh Tomar, arrested over the "fake" degree row, RML Awadh University, from where he claimed to have graduated, on Wednesday denied having any such record.

A Delhi police team took Tomar to Faizabad in Uttar Pradesh and examined documents at the Awadh University Registrar's office and the Saket Degree college and took them in sealed cover. Tomar was later taken to Munger in Bihar.

In Lucknow, Tomar on way to Faizabad maintained that the allegations against him were false and accused the Centre of a "conspiracy".

Tomar, who quit as Delhi law minister after his arrest on Tuesday, claims to have done his BSc from Awadh University.

The AAP leader, who was taken to Lucknow by train around midnight and then by road to Faizabad, claimed that his degree was "genuine".

"My degree is absolutely genuine. It is a conspiracy by BJP and the central government. Yes, they are not letting AAP government work," he told reporters.

Stating its willingness to cooperate with the ongoing probe into the case, the university stood by its earlier stand, saying Tomar's BSc degree was a forged one.

"One Pradeep Kumar had filed an RTI asking for verification of a set of documents related to Tomar's mark sheets and degree. The university had replied on January 22 saying it had nothing of that sort in its records. We stand by our previous stand," its media in-charge S N Shukla said.

He was replying to a question on Tomar's BSc degree. Tomar had also claimed to have completed his LLB degree from VNSL Studies, a law college affiliated to Tilak Manjhi Bhagalpur University of Bihar.

49-year-old Tomar, MLA from Delhi's Trinagar constituency and a first-time minister, was remanded in four-day police custody by a Delhi court on Tuesday.

He was taken by an ACP-level officer along with seven other personnel to Faizabad.