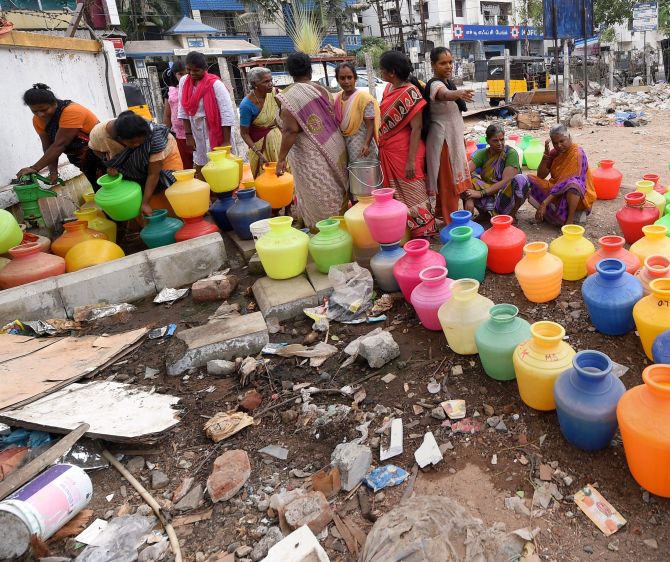 IMAGE: Women queue to fill their vessels with potable water from a handpump in Chennai. Photograph: PTI Photo

The special package assistance would be used to augment irrigation structures in drought-prone areas to address the agrarian distress and drinking water crisis, similar to the allocation made to Maharashtra, Panneerselvam said in the speech.

Referring to the comments made by chief minister K Palaniswami at the NITI Aayog meeting chaired by Prime Minister Narendra Modi last week, Panneerselvam said he endorsed his (Palaniswami's) views and expressed hope that the budget would spell out appropriate strategies, supported with substantial increase in allocation of resources.

On the prevailing water crisis in Tamil Nadu, he said, while there were 'severe drought conditions' country-wide, its impact was significantly "more" in the state.

"The vagaries of the monsoon, climatic change, unending inter-state river water disputes and fast depleting ground water have all led to an unprecedented water crisis in Tamil Nadu," he said.

Requesting the Centre to consider launching a movement for water conservation, he said, there was a need to significantly augment irrigation structures through river system approach for a sustainable water management.

Panneerselvam said Tamil Nadu formulated a project at a cost of Rs 17,600 crore for modernising the Grand Anicut Canal system and has forwarded a detailed project report to the Centre seeking financial aid.

"I urge the Union government to make suitable allocation in the upcoming Union Budget for this project," he said.

Panneerselvam also thanked the central government for expressing its commitment to implement Godavari-Cauvery linkage project and requested the Centre to take up this project on a priority basis and provide "necessary budget allocations".

While calling for a higher investment in combined water supply schemes instead of individual power pump schemes, he said the allocation for the centrally sponsored National Rural Drinking Water Programme had been reduced drastically.

"The Union government may consider to enhance the allocation substantially to improve the drinking water supply on sustainable basis in rural areas," he said.

Panneerselvam reiterated his earlier demand from the Centre to provide an additional allocation of Rs 6,000 crore under the Pradhan Mantri Awas Yojana (Gramin) for construction of two lakh climate-resilient houses to those affected in the devastation caused by cyclone Gaja in Tamil Nadu last year.

"Inclusion of this announcement in the budget speech will greatly relieve the pain of the people who have suffered the fury of Gaja cyclone," he added.

On the Chennai Metro Rail project Phase-I project, Panneerselvam said it was a resounding success and requested the Centre to sanction phase-II of the project considering the public demand to expand the metro rail network.

"I request that this clearance be expedited and an announcement be made in the budget speech," he said.

Panneerselvam said his government has been repeatedly requesting the central government for providing special allocation to the states adversely affected by the 14th Finance Commission recommendations.

"Tamil Nadu has been worst affected, having been deprived of Rs 6,000 crore annually due to change in devolution criteria," he said.

"I would suggest that the IGST arrears may be settled on a rolling basis by taking the closing balance of the previous year as the opening balance of next year, so that outstanding amount is duly settled to states in a transparent manner," he said. 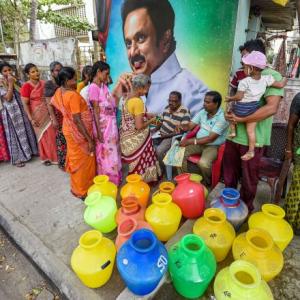