DMDK founder-president Vijayakant along with party presidium chairman Panruti Ramachandran and Youth wing secretary Sudheesh called on Jayalalithaa at her Poes Garden residence in Chennai on Friday night to cement the pact under which the party had been allotted 41 seats, a joint statement released to the media said.

The leaders had a 20-minute meeting.

AIADMK General Secretary Jayalalithaa and Vijayakant have signed the statement.

On February 24, actor-politician Vijayakant's DMDK had launched formal poll parleys with AIADMK to

'oust DMK from power'. Though backdoor negotiations were going on for some time, it was the first time that leaders of both parties had met to initiate poll talks.

Though Vijayakant has been consistently holding that his alliance was only with the people and no other political party, the DMDK however opted for tie up under pressure from party cadres.

Founded in 2005 by Vijayakant, DMDK made its debut in the next year's Assembly elections, with Vijayakant himself winning from the Viruddhachalam seat even as his party polled eight per cent popular votes.

However, the party's performance in the subsequent by-polls and 2009 Lok Sabha polls were below par even as it played spoilsport to AIADMK's prospects by splitting the votes.

Speculation of a possible tie-up between the two parties was doing the rounds for sometime.
Source: PTI© Copyright 2021 PTI. All rights reserved. Republication or redistribution of PTI content, including by framing or similar means, is expressly prohibited without the prior written consent.
Related News: Vijayakant, DMDK, AIADMK, Jayalalithaa, Desiya Murpokku Dravida Kazhagam
Print this article
What Jaya wants for birthday: Victory in TN polls
S-band spectrum: BJP, AIADMK want PM to speak 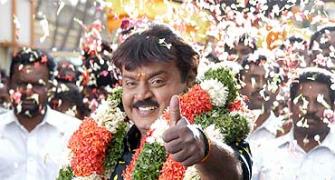