Ageing leadership, reckless family-oriented politics, absence of inner-party democracy, lack of debate on core issues within the party are all taking a very heavy toll on the original Dravidian party, says R Ramasubramanian. Though they were not voted to power, with almost 100 seats in a House of 232 (two seats go to polls next week), the Dravida Munnetra Kazhagam is in a much better position today in Tamil Nadu politics. This is nothing but a great leap ahead for a party which had just 23 seats in the 2011 assembly. To a large extent the credit for this goes to M K Stalin, treasurer of the DMK and party patriarch M Karunanidhi’s second son, apart from being chosen heir to the political legacy.

Stalin’s whirlwind tour of the entire state for several months had indeed galvanised the party. His road show named ‘Nammakku Naamey’ (by us and for us) attracted large crowds. But, alas, the party was not able replace Jayalalithaa in this closely contested election.

The main reason, of course, was the multi-cornered contests, with six fronts in the fray. The votes polled by the so-called third front headed by actor-turned-politician Vijayakanth has clearly helped the AIADMK retain power.

So what next for the DMK? The 92-year-old Karunanidhi is in the twilight of his political career. The immediate concern for the party is the impending judgment in the 2G spectrum case in which his daughter Kanimozhi, a Rajya Sabha MP, is one of the prime accused. The judgment is expected to be out in another three to four months. If the judgment goes against her then it will not only be curtains for Kanimozhi’s political career but also be another severe blow for a party which is already down and under.

Then there is the Azhagiri factor.  Karunanidhi’s elder son, though out of the DMK, is waiting in the wings to make his moves. Then there are the Marans, the media baron brothers who are important players in the party and whose legal battles are an additional headache for the party. The Marans are facing two cases: one, over the Aircel-Maxis deal, and two, the private telephone exchange case. Both these cases are being handled by the Central Bureau of Investigation, the reviled “caged parrot” under the control of a central government that is not very favourably disposed towards the DMK.

The next big problem for the party is the upcoming local body elections which are to take place this yearend. Given the nature of local body polls in Tamil Nadu, where the ruling dispensation controls everything since 1991, the results are a foregone conclusion. If Karunanidhi is 92 and in the twilight of his political career, Stalin too is not exactly young at 63. Since the party does not allow the growth of any second-rung leadership from outside the family to emerge, things are indeed looking difficult in the long run.

The DMK needs to have a strategy in place by the time the 2019 Lok Sabha elections come around.

Interestingly, the DMK is the only political party in India to be a constituent of the Union Cabinet for nearly 14 years, starting with the Deve Gowda and IK Gujral ministries in 1996-98. It was part of the A B Vajpayee government between 1999 and 2004, and segued seamlessly into the Manmohan Singh government that followed for the next 10 years. Thus, the DMK had been part of three governments led by different political formations. Of these 14 years the party had been in power in Tamil Nadu for 10 years, too.

But today the DMK is undoubtedly facing an uphill task and the odds are stacked against it. The ageing leadership and pending corruption cases are posing a serious challenge to its future. Reckless family-oriented politics, absence of inner-party democracy, lack of debate on core issues within the party are all taking a very heavy toll on the age-old Dravidian party.

“Today the party is controlled by 18 families and their kith and kin are getting tickets to contest elections. This is not the party of old-timers where raging debates were encouraged by seniors. Those were the good olden days,” laments a veteran. Undoubtedly, the grand old party of Tamil Nadu is facing an upheaval and tough challenges.

Despite it impressive performance in the recent assembly elections, the DMK is at the crossroads.

Image: Anna Arivalayam, the DMK headquarters in Chennai, wears a deserted look on Thursday, the day of counting of votes. Photograph: Sreeram Selvaraj. 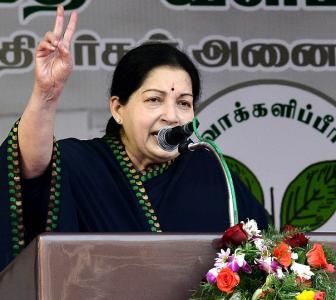 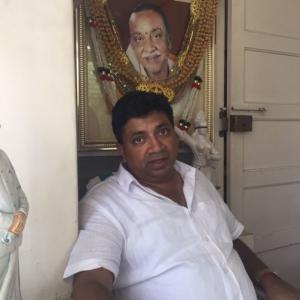 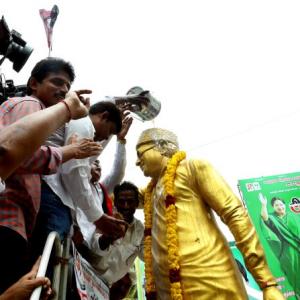