Campaigning comes to an end in TN, Kerala

Sporadic violence on Monday marred the end of campaign for assembly polls in Kerala leaving a minister injured while curtains came down on electioneering in neighbouring Tamil Nadu and Puducherry for the single-phase elections on April 13.

A group of United Democratic Front workers attempted to block the vehicle of Ports minister and Left Democratic Front candidate V Surendran Pillai, when he was canvassing in the last moments of the campaign in Poothura area in Thiruvananthapuram, police said.

Pillai, who belongs to the Kerala Congress (Thomas) faction, a constituent of the ruling LDF, was hurt on his forehead after being hit by a stone. Minor clashes were also reported from places like Perithalmanna, Kayamkulam, Karunagapply and Kaipamangalam. Police said there had been no major violence and the overall situation was normal throughout the state.

The campaigning was by and large peaceful though it ended on an acrimonious note with Chief Minister V S Achuthanandan calling Rahul Gandhi an 'Amul baby' in retaliation to the Congress youth leader taking a potshot at him over his age.

The rival fronts are locked in a fierce combat in most of the constituencies making it a close contest in the state which had alternately voted for the LDF and UDF every five years and where even a small swing could be decisive.

A total of 971 candidates are in the fray, a majority of them independents. The state has a total electorate of 2.31 crore.

The fortnight-long electioneering saw a no-holds- barred campaign veering around personal attacks between bitter rivals ruling DMK and AIADMK. Karunanidhi harped on the theme of development and berated the Election Commission repeatedly for its actions, accusing it of creating an 'emergency like situation'.

On the other hand, Jayalalithaa asked voters to rid the state of 'family rule' of the DMK patriarch and targeted Karunanidhi over "rampant corruption" and "collapse" of law and order. In the Union Territory of Puducherry, over 8.10 lakh voters are expected to exercise their franchise to elect 30 members to the territorial assembly.

The Congress has fielded its candidates in 17 segments while main ally DMK is seeking election from 10. PMK is contesting two while Viduthalai Chiruthaigal Katchi one.

On the rival side, former chief minister N Rangasamy- led All India NR Congress is contesting 17 seats while AIADMK 10. The Communist party of India, the Communist Party of India-Marxist and DMDK have fielded candidates in a seat each. 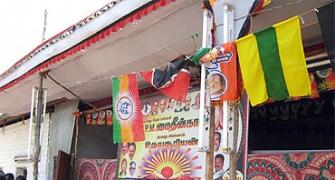 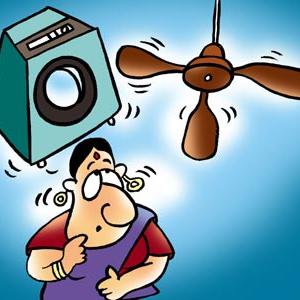