In an unprecedented act, Trinamool Congress Rajya Sabha member Derek O'Brien on Friday gave a 10-minute speech, not in the House but from a corridor of the Parliament building, in protest against, what he called, the government's reluctance to discuss the Delhi violence. 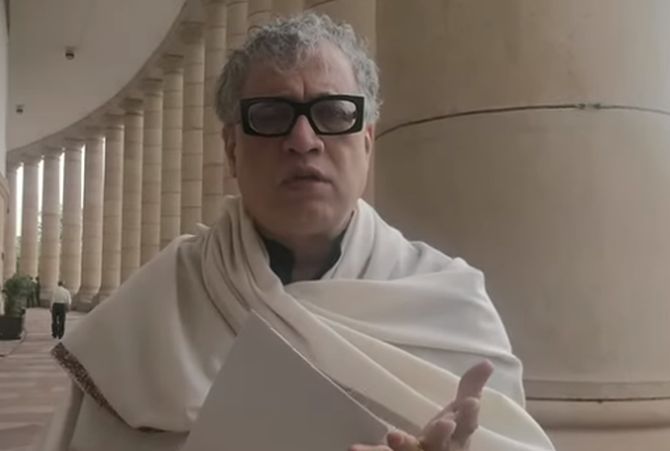 Before beginning his speech, O'Brien, who is leader of the party in the Rajya Sabha, said that opposition parties have given notices five days in a row to discuss the issue, but these have not been accepted.

He alleged that the government is stalling work in both the Houses.

"I have been ready with the speech on behalf of the TMC. Mr Chairman sir, what can I do, the government is stalling Parliament. Today on Friday, I need to make my speech and I am making it not in the chamber downstairs but on the first floor. We have to look at different ways to have our voices heard. So here I am," he said.

O'Brien also uploaded a video of his speech on social media.

Speaking about different stories of pain and loss during the violence in northeast Delhi in which 53 people have lost their lives, O'Brien said despite all these, the government was unwilling to discuss the issue.

"All Modi and Shah do is plan elections. There is enough evidence in the public domain to suggest that after these kind of riots and genocide only one political party gains... They have stalled Parliament because they don't want to answer hard questions," he alleged.

Comparing the Delhi violence with the genocide in Nazi Germany, O' Brien said, "Genocide is a process, even at Nazi time it didn't start with gas chambers. It started with slogans spreading hate and bigotry. Then genocide happened."

He also said that the last time a notice of an opposition member to discuss issues was accepted was in November 2016.

"What does an opposition member do in desperate times like this? I am not going to wait. I hope this speech goes out to the young people of India. I want to ask where is the prime minister. It took him 69 hours after the genocide to respond, that too on Twitter. We are making a laughing stock of ourselves," he said.

Taking a dig at Prime Minister Narendra Modi, who has announced that he would hand over his social media handles to women on Women's Day, the TMC leader suggested that he give it to mothers who have lost children in the Delhi violence and women who have lost their husbands.

"A little bit of democracy is still left in the country that although I cannot speak inside Parliament, I can do so here. Delhi needs urgent healing. Trinamool will not be silenced," he said.