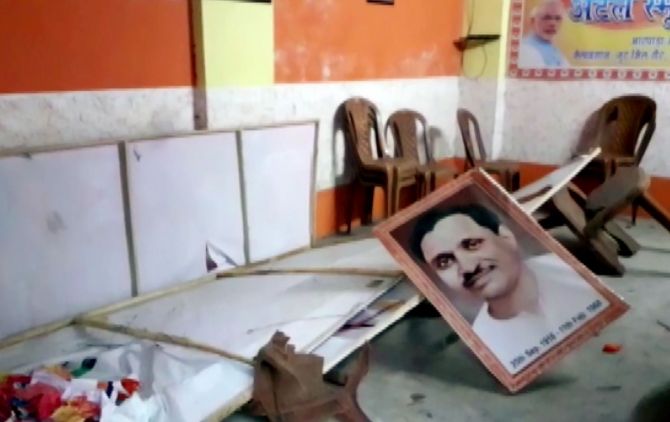 Srinivas Ghosh, 54, a TMC panchayat member of Ketugram's Agardhanga area, was stabbed alleged by members of the Bharatiya Janata Party on Monday night when he was returning home, they said.

Ghosh was declared brought dead when taken to a nearby hospital, they added.

Three people were also injured in the incident and are undergoing treatment, a police officer said.

The BJP denied the charges and said their members were in no way connected to the incident.

Tension was palpable in the area after the incident.

Police said a huge contingent of personnel was deployed to prevent any further flare-ups.

Four persons were detained in connection with the incident, they said.

Incidents of violence were reported from other parts of the state as well.

In Coochbehar district, the house of BJP activist Bharati Nandy in Dinhata was set on fire allegedly by TMC supporters, a police officer said.

Incidents of violence were also reported from Tufanganj where houses of several BJP workers were vandalised, he said.

At least 15 houses of BJP workers were vandalised in Howrah, police said.

A probe has been started into the matter, they said.