TMC MP snatches IT minister's statement on Pegasus, tears it

A Trinamool Congress MP snatched papers from Minister Ashwini Vaishnaw in the Rajya Sabha on Thursday and tore them and faces the prospect of suspension as the Pegasus snooping row turned ugly even as the Bharatiya Janata Party dubbed the reports of surveillance as "concocted, fabricated and evidence-less". 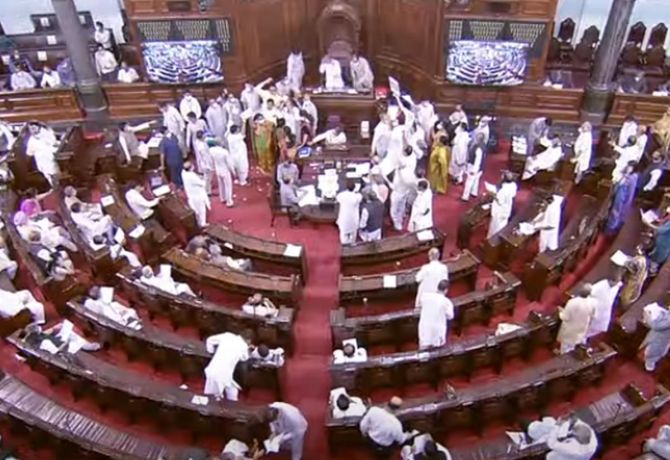 As the proceedings in the Upper House descended into chaos, Santanu Sen, who targeted the Communications and Information Technology Minister as he was making a statement on the snooping issue, alleged that Union Minister Hardeep Singh Puri abused him in the House and was on the verge of physically assaulting him before he was rescued by colleagues.

Sen claimed at a news conference that Puri even rudely gesticulated at him. There was no reaction yet from the minister on the issue.

Sources said the government will move a motion on Friday seeking suspension of Sen. Union Minister V Muraleedharan is expected to move the motion, they said.

The sources also said some Opposition MPs "misbehaved" with members of the treasury benches, including a minister, even after the House was adjourned.

"We are approaching the Rajya Sabha chairman seeking action against them as their behaviour is a blow to parliamentary decorum," said a Union minister, who did not wish to be named.

While BJP president J P Nadda accused the opposition of creating "obstacles" in the country's development journey by disrupting Parliament to "save" its political existence, Union Minister Meenakshi Lekhi condemned the conduct of the opposition members as a "new low" in India's parliamentary democracy.

Opposition parties have stalled proceedings in Parliament alleging the union government's involvement in the alleged snooping following reports that nearly 300 mobile phone numbers including of journalists, activists, opposition leaders from India and even of union ministers figured in this list of potential snooping targets by Israel's NSO group which sells its Pegasus spyware only to "vetted" governments and government agencies.

"This is not a story. This is a non-starter across the globe because based on a concocted, fabricated, evidence-less story, nobody does story. Because that story itself calls for forgery and defamation. Leaked data is an offence and that leads to further complications for people who base their stories on leaked data. it only happens in India," Minister Lekhi told reporters.

West Bengal Chief Minister Mamata Banerjee claimed that the alleged snooping using the Pegasus spyware was "worse than the Watergate scandal" which eruptedin the US during the Nixon presidency. "Pegasus is worse than Watergate scandal; it is super emergency," Banerjee told reporters in Kolkata.

In the Rajya Sabha, the TMC, Congress and other opposition party members, who had earlier forced two adjournments of the proceedings, rushed to the well of the House as Minister Vaishnaw was called to make a statement on the snooping controversy.

Santanu Sen snatched the papers from the hands of the minister, tore and flung them in the air, prompting the minister to stop making the statement after reading a few lines amid the ruckus and say he was laying a copy on the table of the House.

Deputy Chairman Harivansh asked the members to desist from unparliamentary behaviour, before adjourning the proceedings of the House for the day.

"Please do not adhere to this unparliamentary practice."

"You do not want a discussion on an issue you have been agitated about...this is undemocratic," Harivansh said.

He said the minister has laid the statement on the table of the House and asked if the MPs want to ask him any questions on that.

But the opposition MPs continued to raise slogans against the snooping controversy.

The statement that the minister laid on the table of the House was similar to the one he had made on July 19 in the Lok Sabha, a day after the reports of alleged snooping emerged.

In the statement, Vaishnaw, whose phone number was among those listed as compromised by Washington Post, called the reports an "attempt to malign the Indian democracy and its well-established institutions".

Amid the din, Vaishnaw implored all members of the House to "examine the issue on facts and logic".

Narrating the sequence of events as it unfolded in the Rajya Sabha, TMC Chief Whip Sukhendu Sekhar Ray alleged that the Union communications and information technology minister's statement was full of lies.

He said minutes after Sen snatched the paper from the minister's hands, Vaishnaw was handed over another copy and he continued to read.

Soon after, the House was adjourned but not before the statement was tabled and considered as read.

"The minister's statement was full of contradictions and white lies. So one of our members snatched and tore it," Ray said.

The TMC alleged that after the House was adjourned and the live transmission was stopped, Union Minister Puri gesticulated at Sen ordering its MP to approach him.

"I was gheraoed by the BJP MPs," Sen alleged.

The TMC maintained that it would continue to obstruct Parliament proceedings till the government agrees to a "structured discussion" on the issue of snooping using Israeli spyware Pegasus.

TMC's Parliamentary party leader Derek O'Brien said not the Union IT minister, but Prime Minister Narendra Modi should reply to the opposition's questions.

"Our straightforward question is, did you or did you not use the Pegasus spyware? We will not allow them to sweep the issue under the carpet," he said.

Representatives of the Press Club of India, The Editors Guild of India, Indian Women's Press Corps, Press Association, Delhi Union of Journalists along with some eminent media personalities demanded at a news conference that the government should launch a probe into the Pegasus spyware matter and come clean on the issue.

"We demand a Supreme Court monitored inquiry into the acts of surveillance. Media organisations will explore constitutional options for the safeguard of democracy and freedom of press," the Press Club of India said in a statement.

Minister Lekhi cited reports to claim that Amnesty International, the human rights group associated with Pegasus Project, has denied the existence of a list of potential targets of the alleged snooping.

Amnesty International, however, said in a statement that it "categorically stands" by the findings of the Pegasus Project and asserted that the data is irrefutably linked to potential targets of Israel-based NSO Group's Pegasus spyware.

The comments by Amnesty International came after some media reports quoting a few Israeli journalists said that the human rights group has claimed that it never said that the recently leaked phone numbers were specifically a list of numbers targeted by Pegasus spyware.

Uttar Pradesh Congress president Ajay Kumar Lallu and other party leaders were detained in Lucknow while trying to take out a silent march against the alleged snooping on party leader Rahul Gandhi, and were let off later after furnishing a personal bond.