Prime Minister Narendra Modi arrived in the city of Kolkata on Saturday evening on a two-day visit amidst protests against the contentious Citizenship Amendment Act and "Go back" slogans. 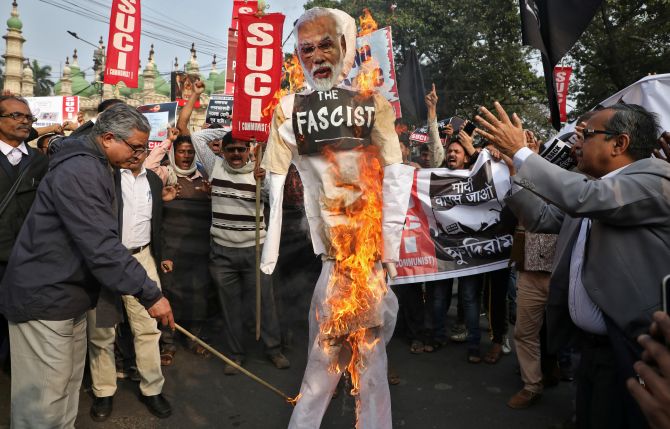 IMAGE: Activists of Socialist Unity Centre of India burn an effigy depicting Prime Minister Narendra Modi during a protest against his visit to the state and against a new citizenship law, in Kolkata. Photograph: Rupak De Chowdhuri/Reuters

Chief Minister Mamata Banerjee was not present at the airport.

The PM's visit comes at a time when West Bengal has been witnessing widespread protests against the contentious Act.

Hundreds of protesters holding black flags demonstrated outside Kolkata airport gate number one crossing. The police had put up a barricade to prevent them from crossing over to the airport side. 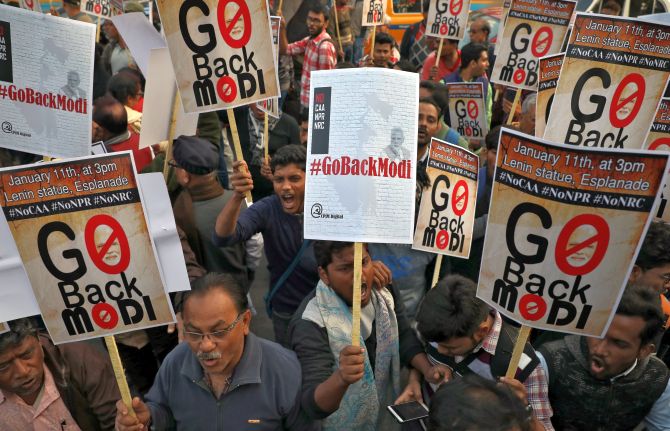 From the airport he took a chopper to the Royal Calcutta Turf Club and from there left for the Raj Bhavan.

As his convoy emerged outside the sprawling RCTC, protesters stood at the AJC Bose Road flyover flank and waved national flags and black flags and shouted slogans against CAA.

During his visit, Modi held a one-on-one meeting with Chief Minister Mamata Banerjee on Saturday evening.

The meeting assumes significance as the new citizenship law has emerged as the latest flashpoint in the state. Banerjee's Trinamool Congress is opposing the contentious legislation tooth and nail and the BJP is pressing for its implementation. 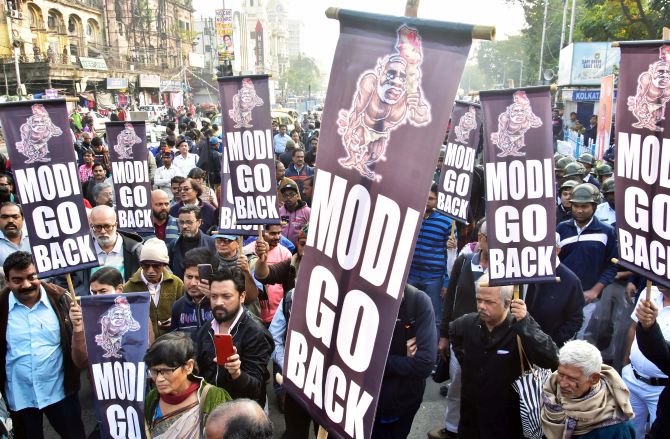 Students' Federation of India activists assembled near Jadavpur University, Golpark, College Street, Hatibagan and Esplanade areas of the city with placards which read 'Students Against Fascism.' They
burnt effigies of PM Modi and Union Home Minister Amit Shah protesting against the "divisive Act".

The Left Front activists staged protests on Saturday against the new citizenship law in various parts of North 24 Parganas district.

The prime minister will dedicate to the nation four refurbished heritage buildings in Kolkata -- the Old Currency Building, the Belvedere House, the Metcalfe House and the Victoria Memorial Hall.

The culture ministry has renovated these iconic buildings and put up new exhibits, while curating the old galleries.

Modi will also participate in the sesquicentenary celebrations of the Kolkata Port Trust on Saturday and Sunday. 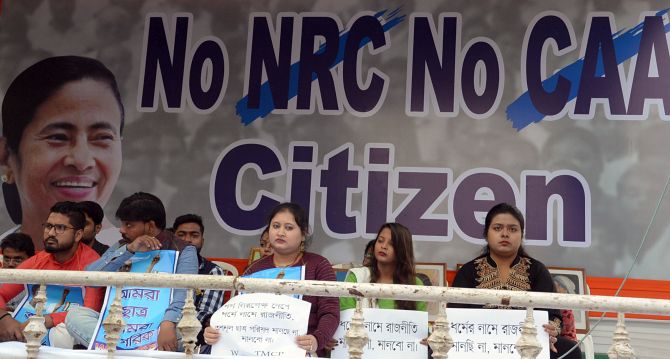 The prime minister and the chief minister will share the dais at programme at Netaji Indoor Stadium. West Bengal Governor Jagdeep Dhankhar will also be present.

Modi is likely to spend the night at Belur Math, the headquarters of Ramakrishna Mission, on Saturday night.
The West Bengal administration has made elaborate security arrangements for the visit.

Heavy deployment of police personnel was made in different crucial points of the city namely Dharmatala, College Street, Golpark, Hatibagan, Jadavpur, Central Avenue owing to planned protests by several organisations affiliated to the Congress and Left Front parties against the CAA and the proposed countrywide National Register of Citizens.