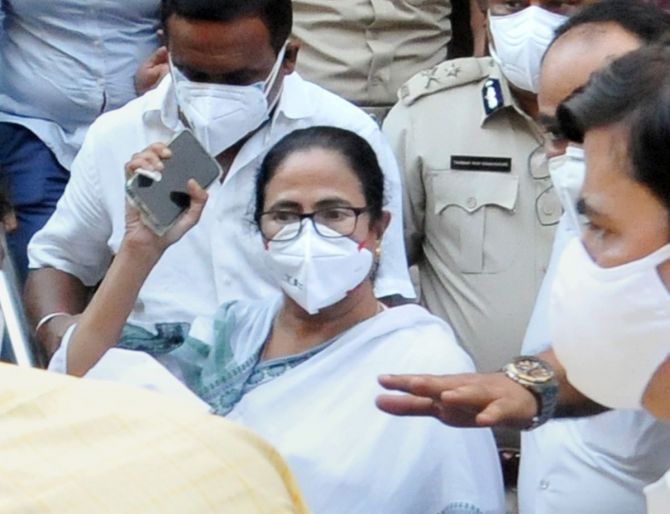 Minister and president of West Bengal Trinamool Mahila Congress Chandrima Bhattacharya wrote the letter on behalf of her party and urged the city police chief to treat it as a first information report.

Senior ministers Subrata Mukherjee and Firhad Hakim and MLA Madan Mitra were arrested by the CBI in connection with the Narada sting operation.

She alleged that leaving its 'independent character', the probe agency is acting at the behest of the Centre and arrested them at the 'direction' of state Governor Jagdeep Dhankhar who has no authority to give such an order.

They want to 'malign our leaders in some way or the other as the Bharatiya Janata Party has failed to win the assembly election', she alleged.

'... the three leaders being members of the WB Assembly, the Hon'ble Speaker should have been consulted and permission should have been taken from him before arrest which also have not been done,' the letter read.

No warrant was produced before arresting the leaders, Bhattacharya said.

Besides the three, former TMC leader and minister Sovan Chatterjee was also arrested in the same case.

West Bengal Assembly Speaker Biman Banerjee earlier in the day dubbed the arrests as illegal contending that the Governor's sanction to prosecute them was unlawful.

Dhankhar had recently granted sanction to prosecute the four leaders, following which the CBI finalised its charge sheet and moved to arrest them.

'His (the governor's) biasness is writ large from the fact that no step has been taken against Mukul Roy, MLA or Suvendu Adhikari, MLA both of BJP although there severe charges of CBI against them,' the TMC leader said in the letter.

Roy and Adhikari, who had joined the BJP from the TMC at different times, were also accused in the same case.

The sting operation was purportedly conducted by Mathew Samuel of Narada TV news channel in 2014 wherein some people resembling TMC ministers, MPs and MLAs were allegedly seen receiving money from representatives of a fictitious company in lieu of favours.

The tapes were made public just before the 2016 assembly elections in West Bengal.

The Calcutta High Court had ordered a CBI probe into the sting operation in March, 2017.

Bhattacharya also said in the letter that Hakim is also the chairman of the Board of Administrators of the Kolkata Municipal Corporation and plays a key role in controlling the pandemic situation in Kolkata. 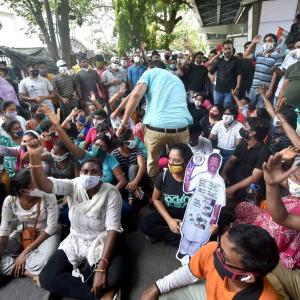