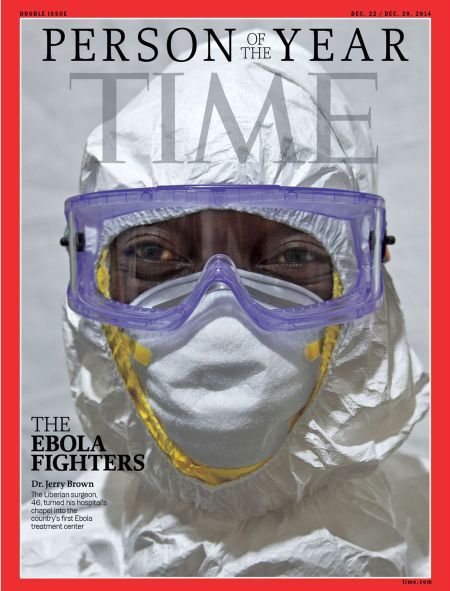 The countless doctors, nurses and caregivers at the forefront of battling one of the worst ever outbreaks of the deadly Ebola virus, were on Wednesday collectively named as Time magazine’s 2014 ‘Person of the Year’.

The ‘Ebola fighters’ have been awarded for their “tireless acts of courage and mercy” and for “risking, persisting, sacrificing and saving”.

Time’s editors unveiled the winner of the annual honour selecting the Ebola fighters from an initial list of 50 world leaders, business heads and record-breaking artists that was narrowed down to a shortlist of eight this week.

“Ebola is a war, and a warning. The global health system is nowhere close to strong enough to keep us safe from infectious disease, and ‘us’ means everyone, not just those in faraway places where this is one threat among many that claim lives every day.

“The rest of the world can sleep at night because a group of men and women are willing to stand and fight. For tireless acts of courage and mercy, for buying the world time to boost its defences, for risking, for persisting, for sacrificing and saving, the Ebola fighters are “Time’s 2014 Person of the Year,” editor Nancy Gibbs said explaining the publication’s reasoning behind the choice.

Time had conducted a separate online poll in which it gave a chance to its readers to select who they think should win the title of Person of the Year.

The readers’ poll was won by Prime Minister Narendra Modi, who had secured more than 16 per cent of the almost five million votes cast.

The annual honour, that has been bestowed by the magazine since 1927, goes to the person who “most influenced the news” during the year “for better or worse”.

Time said doctors working in the worst-hit countries in West Africa did not quit even as their colleagues fell ill and died and nurses comforted patients while standing in slurries of mud, vomit and feces.

It was this drive to help the sick that tipped the scales in favour of the Ebola fighters from the other 49 candidates that included world leaders like US President Barack Obama, Israeli Prime Minister Benjamin Netanyahu, Chinese President Xi Jinping, US Secretary of State John Kerry and business chiefs like Amazon CEO Jeff Bezos, GM’s first female CEO Mary Barra, and singers Beyonce and actress Jennifer Lawrence.

Time said, for decades, Ebola haunted rural African villages like “some mythic monster” that every few years rose to demand a human sacrifice and then returned to its cave.

But 2014 was the year when the outbreak turned into an epidemic, “powered by the very progress that has paved roads and raised cities and lifted millions out of poverty”.

“This time it reached crowded slums in Liberia, Guinea and Sierra Leone; it travelled to Nigeria and Mali, to Spain, Germany and the US It struck doctors and nurses in unprecedented numbers, wiping out a public-health infrastructure that was weak in the first place,” it said.

“There was little to stop the disease from spreading further, Time said adding that “governments were not equipped to respond, the World Health Organisation was in denial and snarled in red tape. First responders were accused of crying wolf, even as the danger grew.

But the countless people in the field, the special forces of Doctors Without Borders, the Christian medical-relief workers of Samaritan’s Purse and many others from all over the world fought side by side with local doctors and nurses, ambulance drivers and burial teams.

The US was also gripped with fear when Thomas Eric Duncan of Dallas became the first Ebola patient to be diagnosed on US soil and also the first casualty.