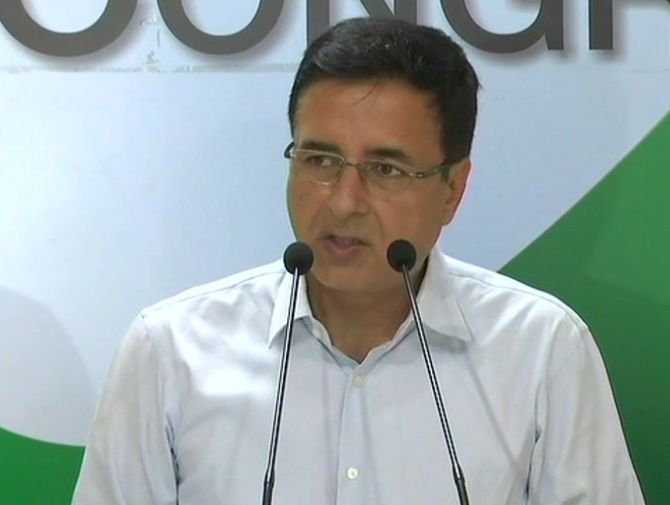 The Congress on Thursday accused the Election Commission of losing its credibility and independence and said time has come to review the process of the poll panel's appointment.

Asking whether the model code of conduct had become the 'Modi code of misconduct', Congress' chief spokesperson Randeep Surjewala said the Election Commission order curtailing campaigning in West Bengal by 20 hours is a 'dark spot' on India's democracy and institutions like the poll panel.

In the first such action in India's electoral history, the poll panel on Wednesday invoked Article 324 of the Constitution to end campaigning in nine West Bengal constituencies at 10 pm on Thursday, a day before its scheduled deadline, following violence between Bharatiya Janata Party and Trinamool Congress workers in Kolkata.

"Time has come to review the process of appointment of Election Commission. Should it only remain an appendage to the ruling dispensation or is it a constitutional body which is so intrinsically important to our democracy that its appointment requires to be mandated and tapered through a fair, transparent process like in many other cases?" he asked.

The debate, in his view, must happen for democracy to thrive and survive and the the entire process of appointment of the Election Commission needs to be reviewed.

The Congress, a responsible political party, has never cast unwarranted aspersions on the actions of Constitutional bodies, Surjewala said.

"But we are deeply saddened to say that Election Commission of India has completely lost its independence and abdicated its Constitutional integrity," the Congress leader added.

It appears the Election Commission action is a 'parting gift' to Prime Minister Narendra Modi and the BJP to ensure Modi's two pre-announced election rallies in Mathurapur and Dum Dum on Thursday are not hit, Surjewala alleged.

"Modi ji's chair, the prestige and independence of the Election Commission and democracy, all three are now in danger on account of the actions that we have seen in the last 24 hours. People are the final masters in this country and when all else fails, democracy prevails," he said.

"Instead of punishing the goons and hooligans of the BJP led by their president, Amit Shah, the Election Commission is punishing democracy, per se. It has created a fear psychosis by admitting ECI's inability to hold a free and fair poll. The order of the ECI is an unpardonable betrayal of the Constitution," he said.

"As democracy is under attack from the ruling BJP, time for EC to submit before people of India, instead of being stifled by PM Modi...," he said.

"... Wasn't EC's order aimed at solely giving a free pass to the two public rallies of Narendra Modi being organised today afternoon and evening at Mathurapur and Dum Dum? Can there be a more glaring instance EC's being muzzled into submission by the ruling party?" he asked.

Surjewala said the Congress filed over 11 complaints with the poll panel against Modi and Shah.

Despite clear dissent in the Election Commission ranks and 'clear cut case of brazen violation of MCC (model code of conduct), it meekly surrendered to the whims of Narendra Modi and Amit Shah', he alleged.

"Has the MCC now become 'Modi Code of Misconduct' to be applied to BJP's political opponents, with total immunity for the PM and the BJP president?" he asked.

The Congress leader said the unchecked and brazen violence and arson by the BJP in the West Bengal capital on May 14 deserved strict action against Shah.

The desecration of the bust of 19th century reformist Ishwar Chandra Vidyasagar in Kolkata by BJP goons, while a road show of the party's national president was underway, is a clear cut case for strict action by EC, he said.

"But... the toothless wonder of an institution EC gave the BJP a huge advantage by only prohibiting campaign after pre-announced two election rallies on May 16 by PM Modi get over.

"Does the EC now take orders from the BJP headquarters rather than from the mandate of the Constitution?" he asked.