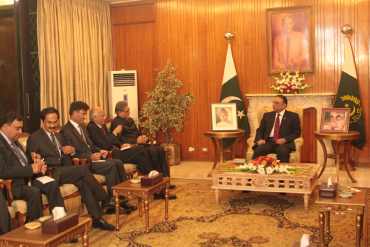 President Asif Ali Zardari has said the time has come for India and Pakistan to show greater understanding of each other's concerns and sensitivities and to "move beyond reiteration of their positions to more substantive results" in the peace process.

Finding amicable and just solutions to resolve outstanding issues was important for Pakistan and India to ensure lasting peace and stability in the region, he said. Zardari made the remarks during his meeting with visiting External Affairs Minister S M Krishna at the presidency on Friday night.

Zardari "emphasised that it was time for the two countries to move beyond reiteration of their positions to more substantive results," presidential spokesman Farhatullah Babar said.

"Showing greater understanding of each other's concerns and sensitivities would help in the solutions of mutual issues," Zardari said.

He further said the two countries "must not allow the derailment of the normalisation process."

In this regard, Zardari suggested the revival of the joint anti-terrorism mechanism comprising representatives of the foreign ministries, home and interior ministries and intelligence agencies of the two countries.

Multifaceted cooperation between the two sides is imperative for socio-economic development of people and to cope with the "common enemy" of terrorism, he said.

Pointing to the need to fight terrorism jointly, Zardari said Pakistan "stood resolute to fight it till the finish."

Zardari renewed his call for India and Pakistan to make determined efforts for "friendly, cooperative and good neighbourly relations" and for "treading the path of productive and result-oriented dialogue."

Zardari called for exchange of visits of businessmen and entrepreneurs to enhance bilateral trade. He said frequent interactions of the leadership of the two countries will help provide impetus to efforts for ensuring peace and creating better understanding on various issues.

"We have great respect for Mrs Sonia Gandhi and hold Dr Manmohan Singh in high esteem. We appreciate (the Indian) prime minister's vision for peace in South Asia," he said.

Pakistan has an abiding interest in promoting regional peace and stability that would enable people to exploit "enormous opportunities available in South Asia," the President remarked.

In a separate meeting with Krishna, Prime Minister Raja Pervez Ashraf expressed confidence that bilateral relations will improve and move forward "as we have set a direction."

Noting that both countries desire good relations, Ashraf said: "We must learn from the past. We cannot change neighbours."

"No doubt Kashmir, Siachen, Sir Creek and other issues need to be resolved" but we need to have a positive approach to resolve them, he said.

Ashraf too said terrorism is a "common enemy" of both countries.

He said there is political consensus in Pakistan on having good relations with India.

Ashraf also extended an invitation to the Indian Prime Minister to visit Pakistan.

Krishna told Ashraf that India is "committed to the stability, peace and prosperity of Pakistan," said a statement issued by the premier's office.

He said he agreed with the premier's assessment that the current atmosphere between the two countries was good and added that both sides "need to create the right kind of atmosphere for creating a feel good factor."

Krishna further said both Ashraf and Manmohan Singh hail from the same region and this would help solve issues that haunt the two countries. 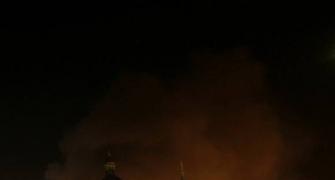 Krishna will have to SHOW his serious intent to Pak