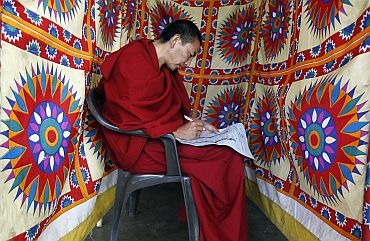 Thousands of Tibetans across the world on Saturday voted to elect the prime minister of the Tibetan government-in-exile, an exercise that may usher in a transition in the community's leadership following the Dalai Lama's 'flat refusal' to reconsider his decision to retire as its political head.

"As many as 83,399 exiled Tibetan settled in India, Nepal, Bhutan, the United States, European countries, Australia, Japan, Russia and other countries were eligible to exercise their franchise to elect the prime minister and 43 members of Tibetan Parliament-in-exile," Jamphel Choesang, chief election commissioner, said.

The one-day election has aroused great interest this time, as it would be for the first time that an elected prime minister would function as democratic head sans possible active guidance of the 75-year-old Dalai Lama.

The five-year tenure of the prime minister would be significant as it could mark a transition from "one-man leadership" of the Dalai lama to a democratically elected government of exiled Tibetans.

The Dalai Lama, a Nobel peace prize winner, has been both the spiritual and the political head of the Tibetan government-in-exile which he had founded after fleeing to India in 1959 following a failed uprising against Chinese rule in Tibet.

But he had on March 10 announced his decision to step down as political head of Tibetan government-in-exile. Tibetan officials said that the Dalai Lama, who will continue to be the spiritual head of the community, will not exercise his franchise in the election.

The result of the election would be declared on April 27. The current prime minister-in-exile Samdhong Rinpoche has already served two terms and the Tibetan charter bars an individual from holding the office for more than that period.

The three candidates in the fray for the post of the prime minister of the Tibetan government-in-exile, which is known as 'Kalon Tripa' in Tibetan language, are -- Lobsang Sangay, Tenzin Namgyal Tethong and Tashi Wangdi.

Lobsang Sangey is a senior fellow of Harvard Law School, whereas Tenzin Namgyal Tethong is a diplomat also settled in the US.

Tashi Wangdi was the Dalai Lama's representative in Brussels, New York and New Delhi. Tibetan officials maintained that the main contest was between the US-based candidates Sangey and Namgyal.

Sangey had emerged as the front-runner during the October 3, 2010 primary poll for nomination of prime ministerial candidates. Sangey, 43, got the maximum number of 22,489 votes while Namgyal got the second highest of 12,319 votes in the primary elections that recorded 61 per cent polling.

The lone woman candidate, Dolma Gyari, who was poor third with just 2,733 votes, opted out of the race for the final elections. Dolma is deputy speaker in the parliament-in-exile.

The votes polled in Nepal and Bhutan were not counted in the primary round. "More than 1,000 votes could not be counted as 18 ballot boxes were seized by the Nepal police at polling booths in Kathmandu," Tibetan officials said, adding it had been done apparently under the Chinese pressure.

"Similarly, the Bhutanese government had ordered Tibetan authorities there not to send the ballot papers to the election commission in Dharamsala and 613 votes cast in Bhutan had also remained uncounted," they said.

The incumbent Prime Minister-in-exile Samdhong Rinpoche had become the first elected prime minister for a five-year term in September 2001 after the Dalai Lama called for a directly elected political leader of the exiled Tibetans.

At that time, there was only one candidate in the fray. Rinpoche was re-elected in 2006 but he could not contest this time as the Tibetan charter bars any individual from holding the office for more than two terms.

The main question that weighed heavily on the minds of the people was as to who could run the affairs of the Tibetans and vigorously pursue the cause of the community "in the absence" of the Dalai Lama who guided the Tibetans and spearheaded the struggle for genuine autonomy in their homeland for over six decades.

There are more than 140,000 exiled Tibetans and over one lakh are settled in different parts of India. The Dalai Lama had yesterday ruled out reconsidering his decision to quit as the political head of the community despite a plea by the Tibetan parliament-in-exile.

He returned the resolution passed by Tibetan parliament- in-exile, asking him to reconsider his decision and made it clear that he was firm on his "well thought of decision" to hand over power to a democratically elected leader, Joint Secretary at the Dalai Lama's office Tenzin Taklha, had said.

"Now, a decision on this important matter should be delayed no longer and all the necessary amendments to the Charter and other related regulations should be made during this session of parliament so that I am completely relieved of formal authority," the Dalai Lama had said in the message.

The Speaker Penpa Tsering had submitted the resolution passed by the exiled parliament to the Dalai Lama and he returned the same to the body, sources in the Tibetan administration said.

The Dalai Lama had announced his decision to retire as political head of Tibetan government-in-exile to hand over his "formal authority" to a "freely-elected" leader.

Image: A Buddhist monk chooses his candidate while seated inside a voting booth during elections for a new prime minister for Tibet's government-in-exile in McLeodganj